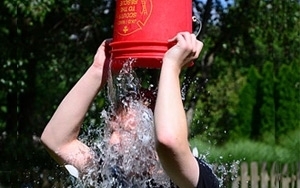 With most of the water poured, ice melted, and buckets returned to the closet, marketers are getting their first look at the full impact of the ALS Ice Bucket Challenge.

The social media-driven juggernaut -- the origins of which have been debated -- convinced millions of people to pour ice water on their heads to raise awareness for ALS, and raise over $110 million to fight the degenerative disease.

Participation in the campaign -- which included millions of people, public figures and celebrities posting videos of their icy challenges on Facebook, YouTube and other platforms -- peaked in August.

According to data from Millward Brown Digital, traffic to the ALS Association Web site skyrocketed in August with unique visitors growing over 4,000% month-over-month, and over 3,300% year-over-year. From July through August, referral traffic from social media sites grew 161%, and accounted for over 18% of referral traffic.

At least momentarily, the fundraising campaign also dramatically altered the demographic makeup of ALSA.org’s audience. From month to month, the share of the site’s audience that fell into the 18-34 age bracket jumped from 23% of to 43%.

“Using a social-media viral campaign to increase participation from a younger audience than the typical ALS donor base proved to be an excellent tactic,” said Rachel Eisenberg, director of strategy & marketing at Millward Brown Digital. “Not only did ALS increase donations, but they were incredibly successful in increasing their awareness among a much sought-after demographic,” she added.

The impact of the challenge was also seen in search referrals to ALSA.org with 11 of the top 50 keywords relating to the ALS Ice Bucket Challenge, which accounted for nearly 30% of search traffic to ALSA.org.

Boding well for the cause, another 10 of the top 50 keywords were directly related to donations and finding out how to donate to the ALSA.

Based on analysis of 1,500 #icebucketchallenge videos on YouTube, RJMetrics recently reported that only 20% of participants mentioned making donations to ALSA.

Still, the campaign has raised over $110 million in donations, according to the ALSA. That’s not bad considering the association said donations totaled just $2.8 million during the same time period -- from the end of July to the end of August -- last year.