More Screen, More Media: iPhone Got Bigger Just In The Nick Of Time? 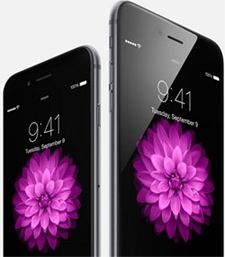 Apple has posed a conundrum for all upgraders today. As the hordes of iPhone loyalists set their alarms for the 12:01 Pacific Time start time for pre-ordering the iPhone 6 and iPhone 6 Plus models, now these customers have more than a color and storage choice. The big decision over which of the larger sizes -- 4.7 inches or 5.5 inches -- to order has become such a thing in the last few days that fan sites are publishing printable PDFs with outlines of the two models you can cut out and try in your hand.

Was it just a short while ago that the fanboys chortled at the slabs rival manufacturers were pushing into a new “phablet” market? Now they are trying to convince themselves that Apple did bigger better. Walking around talking into a floor tile doesn’t seem as silly as it once did.

According to Adobe this week, Apple’s incredibly inflating iPhone came just in the nick of time for consumers’ waning patience with smaller screens. In its survey of 18 billion visits to U.S. consumer Web sites in June 2014, the company found that phones with screens larger than the iPhone 5/5S 4-inch screen were driving an ever greater share of Web traffic, with the smaller phone browsing down 11% since a year ago.

Similarly, tablet browsing overall exceeded smartphone volume a year ago, although its growth has flattened now. But the upshot for Adobe is that bigger screen equals more media consumption. And the larger phones are providing more of that browsing experience. In other words, the phablet is winning.

All that said, Apple’s Safari continues to enjoy a 59% share of mobile Web traffic, down 2.9% YoY. But Android’s native browser (20.3%) was also down .9% in share. Both lost ground to Google Chrome, which grew 5.7% to own 14.3% of mobile browsing. And overall, iPhones were still responsible for 56% of all smartphone traffic in June.

Tablet share is still owned (80%) by the iPad, although Amazon (5%) has popped up as the player for second against Samsung (7%). The Amazon stat is especially interesting because the Kindle line of tablets is not known for its browsing prowess. That 5% of tablet browsing comes from Amazon suggests a decent toehold into the tablet market.

Ultimately, we are seeing higher resolutions and larger screens drive more tablet-like media consumption behavior on smartphones, and that can only be a plus for both media and marketing. A clear sign of this is how smartphone use of WiFi networks is up considerably, while cellular channel use is down for mobile Web. We can surmise from this that people are cognizant of the larger bandwidth their enlarged mobile media habits require. Video no doubt is a main beneficiary and likely a common trigger for seeking those WiFi spots. It indicates that we are way beyond mobile lookups and quick grabs. The phone is becoming a reasonable site for deeper media experiences.

Now all we need is for marketing creative to start catching up.