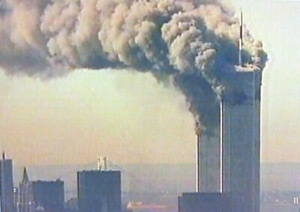 More than any documentary or news program that I can think of, this replay that runs for three hours and six minutes immediately transports me back to the experiences of that fateful day. In fact, just this morning I watched it in the same kitchen where I sat transfixed thirteen years ago today during those three-plus hours (and for many after that), when breaking news about the crash of what at first was thought to be a small plane into one of the Twin Towers at the World Trade Center immediately and unimaginably snowballed into so much more. My old analog kitchen TV has since been replaced by a high-definition model, but in every other way the experience felt very much the same.

I was struck this morning by the gauzy quality of the analog image on the screen (all of television had not yet converted to high-definition back then). I couldn’t help but wonder what the viewing experience on the morning of 9/11 would have been like (and what it would have been like since then on MSNBC) if in 2001 it had been a high-def world. In some ways I imagine it would have been even more horrifying to watch, because we likely would have seen the carnage and chaos in much greater detail, including people jumping from windows, some of them burning alive.

Another interesting aspect to that 13-year-old coverage is the comparatively restrictive circumstances under which Matt Lauer, Katie Couric and the rest of the “Today” crew, as well as other reporters from NBC (including Tom Brokaw) were working at the time. Most of their communication that morning was via landlines and the occasional working cell phone, but it seemed to take forever in that pre-Twitter time for the smallest bits of information to become known. In addition, much of the coverage consisted of a distant live shot of the Twin Towers -- first the North Tower burning after being struck by American Airlines Flight 11 (when no cameras were on the buildings, as there was no reason), then United Airlines Flight 175 chillingly coming into view and crashing into the South Tower, then almost an hour of a simple shot of the two towers burning, then the horrific sight of the South Tower falling, followed by the fall of the North Tower.

If technology then had been as advanced as it has since become, I imagine there would have been no shortage of live footage of all of the above shot from all angles and being streamed from hundreds (if not thousands) of smartphones and other mobile devices (though at some point the smartphones would have been compromised or stopped transmitting altogether, but video recordings would have continued and been posted later).

I don’t think we would be any better off with exponentially more coverage, much of it certain to be unbearably graphic and invasive. In that respect I’m glad technology in 2001 had not yet begun hyper-accelerating in the way that it would just a few years later. And yet I’m awfully glad we have the documentation that we do, and I applaud MSNBC for running its extended “Today” show-NBC News coverage from that morning. (Lauer and Couric remained remarkably composed throughout, even as they and we watched the slaughter of thousands).

I have heard it said that such replays constitute overkill, or that the footage is too terrifying for children to see, and additional such nonsense. This footage is a recording of an historical event that changed everyone’s lives in an instant and continues to impact the lives of everyone in this country and many others, including people who were not yet born in 2001. Everyone should be reminded from time to time of exactly what it was like to experience events on that day as they happened, and nobody does that better than MSNBC.

Perhaps I’m more preoccupied with 9/11 and everything it has meant to all of us than I normally am on its anniversary because I spent last Thursday night at a National Geographic Channel event at the 9/11 Memorial and Museum, which included rare private access to the museum area -- an experience I will never forget. Still, whenever I do watch the annual MSNBC coverage it stays with me all day, and I often take away new observations and impressions of the events on that morning.

For example, watching the horror play out in lower Manhattan with the hindsight knowledge that the crews and passengers in American Airlines Flight 77 (which would be flown into the Pentagon) and United Airlines Flight 93 (which would be brought down in a field in Shanksville, PA) were at the time experiencing unimaginable horror of their own adds a new dimension to the real-time viewing experience. So does the moment (previously unknown to me) when NBC reporter Jim Miklaszewski, who was in the Pentagon and reporting what he knew about the attack in New York City, told Katie Couric that he felt what may have been an explosion of some kind that made the entire building shake. (Miklaszewski was in the far opposite end of the Pentagon when Flight 77 crashed into it.)

Will MSNBC still run this priceless documentation 13 years from now (assuming the 24-hour news channels as we know them now still exist then)? Or will it be confined to YouTube, where it will be forever preserved, but likely will rarely be watched in its entirety? It seems too remarkable not to be showcased in some way. It is the most powerful telecast in the history of media --  one we can only hope will never be surpassed.

This column was previously published in TV Blog on September 11, 2014.