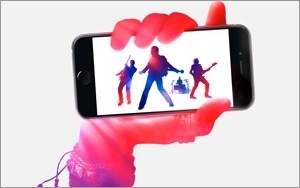 When CEO Tim Cook capped off the marathon Apple keynote on Tuesday by bringing out Bono and U2 for a live number, it already felt over the top. Like an ice cream Sunday after a 12-course meal. But the main surprise wasn’t U2’s appearance itself, but the giveaway of the band’s latest album — “Songs of Innocence” — to half a billion iTunes users.

Depending on a user’s setting, the album would automatically download to their Apple device, or simply show up in the list of albums purchased through iTunes. Either way, it has become clear over the last couple of days that the direct marketing blitz hasn’t gone down well with many customers, leaving them confused, angered or annoyed.

“Great! A new U2 album in my iTunes. Now I am just waiting for a McDonald’s cheeseburger in my mailbox,” griped a Twitter user with the handle Mkleebe, one of many who have taken to the microblogging service to express their irritation at the unwelcome Apple gift. Another characterized the move as a “massive privacy breach.”

While some younger users might have been puzzled about getting an album from a band called “U2,” others seemed intent on showing off their disdain for a rock band that reached massive mainstream success long ago. “I was proud of the fact that I never bought a U2 album. Now I have one forced on me by Apple. Thanks for that. I hate U2,” tweeted Jon Willliams on Thursday.

Given Apple’s vaunted reputation as a savvy marketer, the backlash to the free U2 album looks like a rare misstep, and out of character with a usually more subtle approach to promotion. What’s more, the company didn’t really need to throw in the U2 freebie as a sweetener considering pent-up demand for the new, larger iPhone models.

The Apple Store online crashed early Friday from the traffic volume when pre-orders went on sale, and lines are sure to wrap around the company’s physical retail locations when the iPhone 6 and iPhone 6 Plus hit store shelves a week from now. Cook himself called it “the mother of all upgrades.” So why did Apple think it needed to add in the “Songs of Innocence” giveaway?

Had Apple simply announced the album was free for users to proactively download from iTunes, it would have avoided the backlash that unfolded. And in an online essay Tuesday, Bono himself seemed to acknowledge that some people might not be crazy about having the 11 new U2 songs pushed to their iTunes accounts.

“And for the people out there who have no interest in checking us out, look at it this way . . . the blood, sweat and tears of some Irish guys are in your junk mail," he wrote.

The episode, in any case, should be instructive for marketers. Even for one of the most popular rock bands of all time — and one of the most successful consumer electronics companies — bypassing the opt-in approach for online campaigns or promotions can produce the reverse reaction, even for free trials. And if your brand isn’t as durable as Apple or U2, it could have more damaging effects.