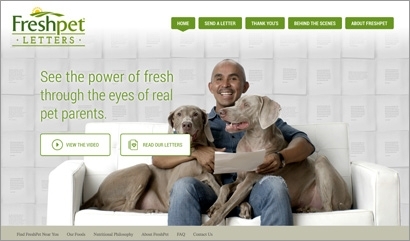 Real consumers always serve as the best brand advocates, and now, Freshpet is using its devoted fan base in its new advertising campaign.

The effort also includes digital pre-roll and display banners and a social media campaign entitled #TuesdayTransformation, as well as branded posts on several social platforms, such as Facebook, Twitter, and Instagram.

Every Tuesday, a pet parent will be selected for the Freshpet social spotlight, which includes a before and after post showcasing his or her pet's transformation after switching to Freshpet. This social campaign will track across social media channels via the #TuesdayTransformation hashtag.

A “Letters” microsite is launching within www.freshpet.com to feature an archive of interactive pet parent letters. It will also feature videos of the select pet parents talking about their personal experience with Freshpet products as well as behind the scenes from the TV commercial.

"The level of emotion in each letter was truly incredible,” says Sandy Greenberg, co-founder of The Terri & Sandy Solution. “We know pet parents trust other pet parents, so building a campaign around these real stories gives Freshpet that much more credibility.”

This campaign's concept grew from Freshpet's first advertising campaign. The "Protest" effort featured dogs with signs protesting against preservatives and other mystery ingredients found in commercial dog food. These spots resonated strongly with pet parents, and inspired them to not only try the product, but to share their story with Freshpet directly. Hence, agency executives recognized that leveraging these passionate fans would ultimately serve as the most effective brand advocates.

Petfresh's annual ad spend is approximately $13 million. The Terri & Sandy Solution has been the brand's AOR since 2011.