Sennheiser Gives The Ears Some Love 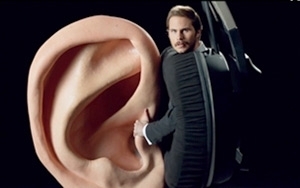 Sennheiser, a German-brand known for its high-end headphones, pokes fun at itself and engages in a bit of whimsy in a new campaign aimed at Millennials, featuring a man dressed as one of its Urbanite headphones, seducing an oversized ear.

“We have been in the past about communicating the technical aspects of our products,” Stefanie Reichert, Sennheiser’s director of marketing for the U.S., tells Marketing Daily. “In terms of communication [to Millennials], we knew we had to act differently.”

The central part of the multichannel campaign (from agency McKinney), which uses the tagline “Let your ears be loved,” is a dedicated Web site, www.sennheiser-urbanite.com, and a series of love scenes between the man (dressed as a headphone) and a gigantic ear. In the videos, the man, speaking in German-accented English, says he loves ears. “I vas born to pamper zhem,” he says, while giving the ear a bubble bath. He also gives the giant ear a massage, and woos it by a candlelit fireplace. “I live to serve. Because whatever makes the ears happy, makes me happy,” he says.

“We believe better sound equals better emotions. This tactic translates that into a more humorous language,” Reichert says. “It’s visualizing the message that this is all about emotion, The character is also meant to showcase in a way our German heritage.”

In addition to the videos (which will be promoted via Facebook, Twitter and YouTube), the brand is promoting an “ear selfie contest,” through which consumers are encouraged to post pictures of their ears with the hashtag #earselfie. A jury will review the photos weekly for entertainment and amusement and reward 500 free Urbanite headphones.

“[The social sharing] is one way of making the campaign accessible globally. Online, you can reach a much wider audience,” Reichert says.

Between Sept. 12 and Sept. 21, Sennheiser will also run a scavenger hunt in New York City, challenging people to find 1,000 golden ears around the city. Bringing one of the removable ears into the Urbanite store in New York will get a new pair of headphones. The brand will launch a similar contest in London in October.