My Fashion Week In 48 Hours 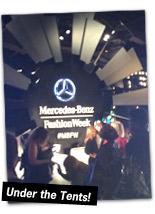 Every year the women of New York leave the past behind and look forward to the future... this is known as Fashion Week."
-Carrie Bradshaw, "Sex and the City"
Fashion Week is all about the lovely clothes (of course!), the must-have accessories, the sky-high models, the front-row celebs, and the fabulous antics. It is the place to see and be seen for the glitterati, AND it is also a great place for brands to get their message out. Whether it's in the tents at Lincoln Center or at unique venues across the city (garages, salons, subway stations, parks, bars), nothing is off limits when it comes to fashion!

This year, I had the pleasure of haunting the tents at Lincoln Center, which featured installations from Mercedes Benz (Title Sponsor), an American Express Concierge desk, a Pandora Jewelry station and an E! News Lounge (which was vacant for some reason... RIP Joan Rivers). 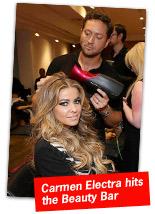 But before a gal (or guy) makes an appearance in the circus of fashion that are the tents, it is always good to have your 'do on-point. Enter the Panasonic Beauty Bar, where celebs, media and fashionistas receive grooming treatments prior to attending the fancy pants runway shows.
Women were treated to Neutrogena washes and styling done with the Panasonic hair dryer and flat iron. Men received professional shaves with the Neutrogena men's line and Panasonic trimmers/shavers. Following their beautification, guests took pictures at the Flixel stations, checked out the Panasonic headphones and learned about the LUMIX cameras. Let me say, if you haven't heard of a Flixel before, you must check it out. It's like a portrait merged with an animated .gif and it is genius! In attendance were some of my personal pop culture faves, Perez Hilton, Jenny McCarthy, Sean Lowe and my fave Jill Zarin! 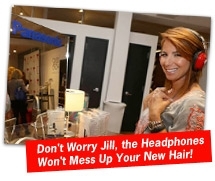 After looking gorgeous and heading to a few fashion shows, the next logical step is to hit a good party. And I have to say, the SheKnows team throws the BEST parties. It's not only that their parties are fun but every event they put together is always on-point for their audience (they are a publisher that celebrates women's interests and experts). 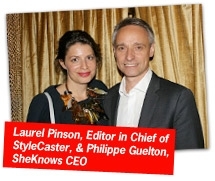 This particular party feted the launch of Juicy Couture's newest fragrance, Viva La Juicy Gold Couture at Fashion Week New York. And where would one hold a party for something like this, but at the exclusive Gold Bar of course! There I chatted with the ever-dapper, Philippe Guelton, CEO of SheKnows Media, about the event. They had recently acquired StyleCaster, making the Juicy Couture partnership a perfect fit for the growing media powerhouse. 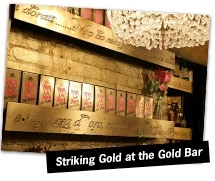 Bottomless champagne, ice cream inspired by flavor cues from the perfume, a requisite photo booth, great nosh (can we say MINI TACOS?!) and a swag bag (always), brought Fashion Week to close on a and an evening out with my trusted advisors, brought another Fashion Week to a close on a high note.
I would also like to say a tiny prayer to the fashion gods - thank you for canceling Fashion's Night Out. It was a total sh*t show and I feel much safer on the streets of New York now and I'm sure this guy does too. THANK YOU THANK YOU THANK YOU.