Random Reflections On My Hindsight Experience With The TV Blog 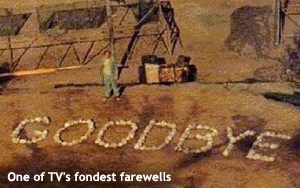 This column marks the end of my year writing the daily MediaPost TV Blog. In most farewell columns of this kind, the next sentence would be something about what a wild ride it has been, or what a year of tremendous change it was for television, or how it was a year unlike any other, etc., etc.

But the truth is it was a year largely like any other, because for at least 30 years the television industry and the programming that feeds it have been in a state of perpetual growth and change, at first because of the expansion of cable, and then the arrival of the VCR, followed by the dawn of the Internet era, ever-accelerating advances in digital technology -- and most recently the biggest changes of all, the rapid adoption of DVRs and mobile viewing devices and the surge in streaming as an alternative to every television tradition one can think of.

My first daily column for this publication was all about yet another potential TV game-changer (that turned out to be anything but) -- NBC’s ten-night live game show “The Million Second Quiz,” which also played out live around the clock on the Internet. It was a hugely ambitious undertaking; so big that, had it succeeded, it would likely be enjoying a second season right now, once again serving as a promotional platform for NBC’s new fall series and returning shows.

Furthermore, at least one other network would probably be trying something similar, because that’s the way they operate. Come to think of it, Fox is currently trying something different and potentially expansive with its reality series “Utopia,” which is also available as live 24-hour “entertainment” via digital technology. As did NBC with “Quiz,” Fox decided to launch “Utopia” early, in part because there is nothing so tantalizing as the possibility of establishing a potential showcase for several vulnerable new series in the weeks before they premiere.

Unfortunately, “Utopia” appears to be a failure on every front, especially as “entertainment,” so Fox currently finds itself in a similar situation to NBC’s last year at this time. But “Quiz” was mercifully short-lived. “Utopia” is supposed to run for a year. I’m not sure if anything can turn this show around -- remember, anything is possible in television -- but if “Utopia” doesn’t improve, and quickly, I’m certain Fox will find a new home for it, or find a way to end it.

NBC may have whiffed with “Quiz,” but its other big bold experiment during the last year -- its telecast of “The Sound of Music Live!” last December -- was a roaring success and may indeed have proven to be the game-changer “Quiz” could have been. “Music” was so well-received that NBC is currently gearing up for another live musical extravaganza, “Peter Pan,” set for December. At a time when broadcast television is said to be drying up, it was great to see a network establish what could be a robust new tradition (and a nice throwback to television of yesteryear).

Most of the excitement in the programming arena these last twelve months was directed toward pay-cable (HBO’s “Game of Thrones,” Showtime’s “Masters of Sex,” Starz’ “Outlander,” Cinemax’s “The Knick”), basic cable (the end of AMC’s “Breaking Bad” and the continuing phenomenon that is “The Walking Dead,” FX’s “Sons of Anarchy” and its thrillingly unique miniseries “Fargo,” BBC America’s “Doctor Who,” to name just a few) and streaming content, (mostly Netflix’s “House of Cards” and “Orange is the New Black”). Nothing on broadcast made that much noise except for CBS’ “The Good Wife” (which proved that long-running network dramas don’t have to become stale or predictable) and NBC’s “The Blacklist” (a riveting thriller filled with HBO-level violence, which seems to have bothered nobody at all).

Scripted series commanded renewed attention, especially those with continuing storylines (after years of broadcast networks insisting such shows were so over), because of their eventual binge potential and the money they can make for networks and studios when streaming services come looking for content. Conversely, declining ratings suggested that interest in reality series -- once the great hope for the future of broadcast -- had begun to erode. Fox’s mighty “American Idol” went into relative free fall, ABC’s “Dancing with the Stars” lost its footing and NBC’s “The Voice” began to sound a bit off-key.

There was much more to the year that was, just as there will be in the year ahead. Given the perpetual advances in digital technology, changing consumer tastes and lifestyles, demographic shifts and so much else, there is no predicting what TV will be year to year. Who knows what it will be five or ten years from now? Fortunately, those of us who remember what it was and the singular power that it had can chill out and refresh ourselves with occasional viewings of classic TV shows on such retro channels as Me-TV, Antenna TV, Cozi and This TV.

I’m ending this final TV Blog entry on that note because the many columns I wrote during the last year about episodes of classic television series were among the most popular. They certainly solicited some of the most interesting comments. Television may be an extraordinary platform today, but those of us who remember when three networks, PBS and a handful of local stations were more than enough know how lucky we were to be able to experience it at that time. Those were certainly grand times for advertisers as well.

But these are glory days for programming, too. Going forward, I’ll continue writing about all of it -- especially programming -- over at MediaBizBloggers, and on occasion, right back here at MediaPost.

tv
8 comments about "Random Reflections On My Hindsight Experience With The TV Blog".
Check to receive email when comments are posted.
Read more comments >
Next story loading