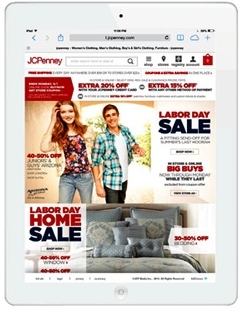 Shoppers at department stores including Macy’s and Bloomingdale's will be among the first to use Apple Pay -- Apple’s new payment service -- which rolls out next month at a select group of national retailers. Perhaps it’s not surprising that those two were rated among the most digitally savvy department stores in a new ranking by research firm L2.

Store brands are evaluated based on their performance across digital marketing, Web sites, social media, and mobile (including tablets). They’re ranked according to L2’s scoring system, which assesses "digital IQ" based on points from less than 70 to over 140. Among the 56 department stores analyzed, five rated in the "genius” category" — Nordstrom, Macy’s, Sears, Marks & Spencer, and JCPenney.

Bloomingdale's -- at No. 6 -- was just behind in the "gifted" category. Nordstrom had been rumored to be in talks with Apple about adopting its new NFC-based payment offering, but was not among the initial set of retail partners named during Apple’s press event last week.

Focusing on the mobile portion of the L2 report, it found that 79% of the brands studied had mobile-optimized sites (up 13% from a year ago), and 44% of the optimized sites accept PayPal. eBay-owned PayPal, though, will soon have a new competitor in Apple Pay, both at point-of-sale in stores and as a payment option within apps.

Overall, brands increasingly are relying on responsive design for their sites rather than building a custom mobile experience to cater to shoppers on multiple devices, according to L2.

On the app side, the vast majority (70%) of department stores had an iOS app, 50% an iPad app, and 46% had an Android version. Among iOS apps, 76% were e-commerce enabled, almost two-thirds offered geolocation, 49% provided ratings and reviews, and 42% included a barcode scanner as well as digital coupons.

But the study also highlighted what author L2 founder Scott Galloway, a professor of marketing at NYU’s Stern School of Business, called “missed opportunities.” These include that only 13% of stores had tablet-optimized sites, less than a quarter provide real-time inventory access online, and only 18% of sites were available in multiple languages, limiting global adoption.

Another interesting note: while Sears received a “genius” ranking overall, the company’s iPhone app has earned a rating of only 2.5 stars, and is plagued with poor reviews despite frequent updates. In fairness, the Sears app has also been rated more than 10,000 times -- far more than any other department store app.

Even without Apple Pay, L2 said 84% of department stores already offer at least one form of contactless payment. The most common is tap-and-go credit cards (66%), followed by PayPal (20%), Google Wallet  (11%) and “other” (18%). But none of those methods has really caught on widely yet with consumers. That’s where Apple Pay has an opening, although it will initially only be available to iPhone 6 users.

“The race to become the standard is definitely on. Google Wallet has stumbled out of the blocks, Apple has a chance to build up an unsurmountable lead,” said L2 Research Director Danielle Bailey in an interview. She added that Macy’s plans to introduce Apple Pay is a further indication of its digital innovation, and helps it fend off the notion that traditional department stores are a dying breed.

Whether Macy’s and Bloomingdale's can live up to their high digital IQs in rolling out the new POS technology in stores will become evident starting next month. Their experience will undoubtedly help others determine whether to also get on board or not.