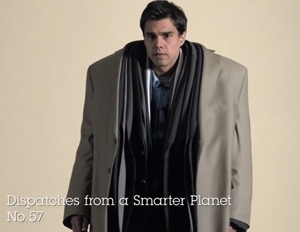 IBM's has been active this year with its "Made With IBM" campaign, especially around its involvement with the  Masters Tournament and the U.S. Open. John Fredette, manager, global media and sponsorship marketing at IBM, talked about where golf and tennis meets tech at OMMA Video Insider Summit in Montauk on Tuesday.

This year the company began a focus on how IBM is helping its customers create. The “Made With IBM” campaign launched around the Masters Tournament in April with a unique video program involving 50 or so short pieces featuring different scientists, technologies, designers, engineers around the world talking about what they are trying to achieve and how the company’s wares help. "The Masters was very unique because there were only three advertisers," Fredette told the audience.

He said IBM wanted to do something other than the usual activation. "The traditional way of operating is to launch three or four spots. We wanted to make a splash.” He said the huge number of short videos form a mosaic telling an overall story, sequenced in order. Thus, someone watching the Masters Thursday through Sunday would never see the same spot twice. "They are all individual stories, sequenced from a numerical standpoint, with no scripts."

He said the necessity to sequence the spots wasn't an easy sell at all to media partners. "The response was 'you want to do what?' This was very logistically hard to do, but a great idea to rally around." And it was a global effort involving, therefore, numerous agency teams over the course of 12 weeks. "The last thing [media partners] want to hear is 'you need to run this spot in this slot.' It was hard.

What this says about media mix is that IBM is doing mostly online marketing now, per Fredette. "Our media mix is now upside down versus a few years ago. Digital is the majority and our only TV is sports, and only the Masters, the U.S. Open and tennis Grand Slams." For each of them IBM runs all of the back-end data cloud technology.

IBM runs all U.S. Open data to the cloud and has something of a war room in the depths of the stadium in Flushing. An ad IBM ran during the matches used tennis balls batted at a player as a metaphor for data. "It all flows through IBM servers."

"The USTA is in White Plains and most of the year runs like a small to medium-sized business. But two weeks out of the year they operate like a Fortune 500 company with zero margin of error allowed. What a great way for us to tell a cloud computing story. We bring clients and show them what we are doing with sports and that is relevant to a CTO of Citibank, as an example. We can say 'picture this for your business.'"

He said IBM monitors core brand health, engagement and dialogue with the brand and has developed a metric system to tackle paid, owned and earned. "Paid exposure is easy. But earned is where people are sharing it, even those you didn't target." He said that the core target has changed as well. "Two years ago I would have said it's the C-suite. But new tech companies are app driven. You can guess the CIO of Yelp isn't the same as at a larger company: it's a younger, tech-savvy, socially adept person."