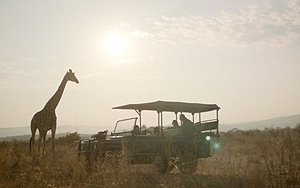 Expedia's newly launched Expedia + Rewards loyalty program earns points from every airline and every hotel on every trip travelers take, regardless of brand or company.

Now, to raise awareness for this program, Expedia and ad agency 180LA are targeting those that will use these services most frequently: business travelers.

The television ad "Safari" tells the story of a father who is often on the road for work. With each business trip, he returns home with a toy for his daughter. As his business trips mount, so does her collection of toys. Essentially, these toy animals not only reflect the closeness of their relationship, but also symbolize the points he’s collecting with each trip. Finally, the ads show him using his Expedia+Rewards to take his daughter on the trip of a lifetime that turns all those toy animals into a real Safari.

"This TV spot was created to drive awareness," says Brooke Stites, Account Director, 180LA. "Out of the many travel rewards programs brought to you by credit card companies and airlines, Expedia+ Rewards is different because it's a program designed for travelers by the travel company. Since this is mostly an awareness campaign, anything following will be an evolution of this TV spot."

The concept is based on research that reports Americans collectively left 577 million vacation days unused last year. Hence, 180LA wanted to tap into this reality by taking the approach that all this time spent traveling for business can actually help travelers spend valuable time with their families, by taking advantage of Expedia’s new all-encompassing rewards program.

Still, with so many loyalty programs in the travel industry, executives admit differentiation is critical to this campaign's success. "It's a challenge to get people to understand the true value of this rewards program and what makes it different from the others," says Stites.

The campaign runs across all major networks on a national scale. The company declines to specify its budget, but says the ad spend for this campaign is consistent with other Expedia TV campaigns.