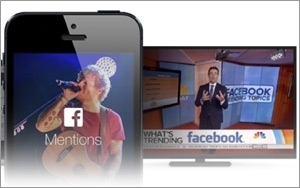 Despite continued declines in organic reach rates, Facebook has never been a better place for brands, publishers and public figures to engage their audiences.

That, at least, is the message from Facebook this week, as it rolls out “Facebook Media” -- a new service for public figures, organizations and media outlets to manage their communication strategies on the social network.

“We hope Facebook Media will become a useful resource for [brands and media elites] to learn more about how to build and engage audiences,” Nick Grudin, director of media partnerships at Facebook, explained in a blog post.

The service encompasses Facebook Mentions -- a recently debuted app that connects public figures to fans through their official Facebook Page.

Following its launch, this summer, Mentions was quickly panned by some notable figures. William Shatner, for one, took to Tumblr to trash the app. “I’m not quite sure why Facebook released this app for 'celebrities'," he said. As Shatner said, “It seems to be ill conceived.”

Facebook Media is also designed to help high-profile users manage their video on the social network and drive referrals “by sharing links and content on your Page, adding the Like and Share buttons, and following other best practices.”

Citing one success story, Grudin noted: “After Bleacher Report increased the number of posts it shared to its Facebook Page, the site saw a (1,500%) increase in referral traffic from Facebook.”

Facebook is also selling networks and personalities on the promise of connecting their TV audiences with their social media fans with the help of its Public Content Solutions program. The effort comes at a time when brands, publishers and popular individuals are questioning Facebook’s merit as an audience management platform.

Regarding Facebook’s decision to cut organic reach rates, some brands have even expressed a sense of betrayal, including Reid Benson, head of paid social marketing at Netflix, North America.

“Our organic team worked really hard to build that [Facebook] community, and then suddenly you can’t reach them,” Benson told attendees of MediaPost’s Social Media Insider Summit, in August. “It’s obviously upsetting to a lot of brands who … went out and earned likes.”

The social giant has insisted that declining organic reach rates are in everyone’s best interest and are an inevitable consequence of its growing community. Regardless of Facebook’s justifications, research suggests that social networks are declining as engagement platforms, while brands and publishers are seeing audience engagement rates rise on their dedicated digital properties.