TV Still Dominates, But Most Political Agencies Will Use Programmatic With 2014 Midterms On Horizon 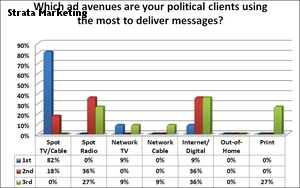 With the midterm elections on the horizon, political marketers are preparing to make use of programmatic buying to reach their audiences. A new STRATA political survey says that 85% of political agencies plan to use programmatic for their political media-buying efforts this year. The company says the agencies polled represent roughly 75% of total political advertising billings.

Unsurprisingly, October will be the biggest month in terms of political ad spend, per the survey. Nearly two-thirds (65%) of respondents said client budgets have either increased or stayed the same since the last congressional election, per a release.

Spot TV/Cable will eat up most of the budgets, with 82% of agencies saying that’s where their clients willl focus. Internet/Digital and Spot Radio tied as the second most-used media, per a release. Spot TV (57%) and online video (43%) offer the greater return on investment.

"Our political shops are leveraging tools and social channels that are built for real-time marketing," stated Joy Baer, president of STRATA. "Because of its ability to react instantly to changing market dynamics, programmatic buying is a tremendous tool for political advertisers when trying to respond to an attack or get a message out right away."