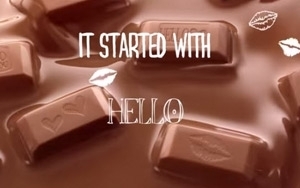 To drive awareness of its new Hello chocolate collection — designed to appeal to a younger demographic than for most premium chocolate brands — Lindt USA teamed with actress and producer Ashley Tisdale and Maker Studios to produce an original, romantic comedy digital series.

The interactive online series, “It Started with HELLO,” includes a teaser (already live) and four episodes, each of which reflects the "personality" of one of the new Hello varieties, which were inspired by classic American treats (Caramel Brownie, Strawberry Cheesecake, Crunchy Nougat and Cookies & Cream).

The series lives on Maker Studios' fashion and beauty network, The Platform (youtube.com/theplatform). The first episode will premiere on Sept. 18. The other three episodes will debut weekly through Oct. 9.

The episodes show couples as they make their first connections, and encourage viewers to find out what happens after "hello" by choosing their own ending to each story. Viewers can say "hello" to their favorite couples and join the conversation using the hashtag #ItStartedWithHELLO.

The stars of the video series are Maker partners Chester See, Tessa Violet, Amy Pham and Lindsey Stirling, along with Mike Tompkins and Rusty Clanton. Tisdale, whose Blondie Girl Productions produces the new ABC Family show "Young and Hungry," served as producer for the first episode.

The Hello collection -- which comes in bars ($2.89), sticks (99 cents) and mini stick bags -- "redefines what premium chocolate can look and taste like in a trendy new format," says Lindt.