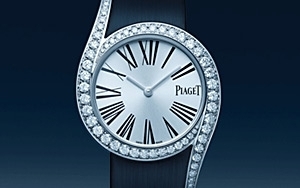 Talk about the clash of the titaniums: For centuries, nothing has said “Master of the Universe” as elegantly as a five- (or maybe even six-) figure watch. Yet for status-seekers who pride themselves on being early adopters, sporting the neighborhood’s first Apple Watch will be a big deal. (Especially since the tech insiders over at CNET are speculating that while Apple’s entry-level watch will be priced at $349, gold ones might sell for as much as $5,000.)

While Tag Heuer has said it’s working on its own smartwatch (and has already developed a smartphone), most luxury watch brands seem confident that the old-world chic of the Swiss will outlast any Silicon Valley buzz. And why shouldn’t they be? Sales of luxury timepieces are strong, and online interest for luxury watches is up 7% in the second quarter of this year, compared to the same period a year ago, according to the World Watch Report. In the U.S., that growth is relatively faint. But in the developing world, curiosity is rising fast: Online interest in these watches soared 23% in China, 22% in India, and 20% in Saudi Arabia. (Rolex is by far the most search-for brand, it says, followed by Omega, Cartier, Tag Heuer and Patek Phillippe.)

"The Apple Watch is a product that is not useful if you don't own an iPhone,” says David Sadigh, CEO of the Geneva-based Digital Luxury Group, which publishes the report. “It's a product that has been launched to bolster iPhones sales and put a first foot in the door into the smartwatch market. It won't have a dramatic impact on the Swiss watch market at this stage, as the majority of the market is composed of brands at a luxury level,” he tells Marketing Daily in an email.

For now, watch brands seem to agree, and are ignoring the onslaught that so many techies are predicting. Piaget, for example, is unveiling a new “Perfection in Life” global advertising campaign, which positions its sexy timepieces in some of the planet’s prettiest places, including Geneva, Paris, “La Côte d’Azur,” and Los Angeles, and could have been taken straight out of a1960s jet-set travelogue. Shot by photographer Maud Rémy-Lonvis, they make each piece a hero: The world thinnest automatic watch, the Piaget Altiplano, for example, towers above the Manhattan skyline, while the Piaget Limelight Gala, with white gold set with diamonds, sparkles over the Hollywood Hills.

And just to prove it’s not completely unaware of the digital age, the company describes the effort as a “360° brand concept,” supported by social media. Consumers can post pictures of their own favorite cities to Instagram, hashtagged #Piaget and #PerfectionInLife, the submitted photos will be entered into a contest. A special Piaget jury will select 5 winning photos from the 50 that receive the most likes, and says they will be displayed in Piaget boutiques worldwide.

What the designers of smartwatches and wearables are missing, says Milton Pedraza, CEO of the Luxury Institute, “is that smartwatches like the Apple Watch are accessories. They’re functional, but they’re not emotional. Luxury watch buyers see their timepieces as art, an adornment, made with true artisanship. So they’re missing half the equation. Smartwatches don’t have the personality that luxury watches do.”

And while there will doubtless be luxury consumers who already own classic timepieces and who buy smartwatches too, “there’s only so much real estate on the wrist.” That means there a tremendous opportunity for tech companies to partner with luxury watch marketers, “to move beyond the generic, dramatically improve the aesthetic, and increase the appeal.”

For now, though, says Sadigh, “folks at Vacheron Constantin, Rolex and Patek Philippe can still sleep well at night."