Women 50 And Over Are Not Your Parent's Boomers 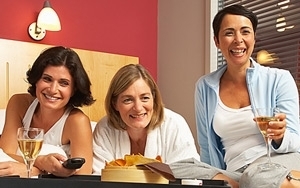 Yes, marketers wear Millennial-focused monocles, but it's kind of hard to believe that anyone at this point would imagine that Boomers spend less time online than anyone else. Empty-nesters in their 50’s are the affluent demo, and the decision makers are women. They are also savvy about the Web and spend as much time on social media sites as any other demographic. They are also probably as unlikely to pay attention to TV and print ads as other people.

Marketing firm Influence Central and Vibrant Nation, an online community for women over 45, have a raft of new data on women over 50 with grown kids. The firms' joint study, based on a poll of 600 women, looks at how women relate to marketers who communicate with them online versus off; how they see themselves; and where they get their trusted information.

First off, women born between 1946 and 1964 disagree that they are behind the times and feel disengaged from pop culture. Seventy-one percent of those polled asserted as much, while 68% said they consider themselves early adopters and independent minded.

And they are mobile minded: 72% of respondents said they use a smartphone to visit social media sites and nine out of ten said they consider themselves "texters," 36% said they — like their kids, or kids’ kids — actually prefer to text rather than talk.

Facebook is their Internet channel of choice, with 89% saying they have an account and 23% asserting that they post to their accounts more than once per day. The firm said about 40% use social media to express their opinions and 59% said they share other peoples' posts on Facebook and Twitter. Facebook is also the preferred brand engagement channel for female Boomers. Three-quarters of those polled said they follow brands on Facebook. Forty percent said they follow brands' social outlets to receive information, and to stay up-to-date on promos and deals. Nearly 50% said they follow brands on social to learn about deals, and 30% do so to get answers to customer service needs.

Although about a third of respondents said they don't want brands to engage with them online, the turnoff is twice as high if it happens offline, with 67% of the women polled saying they are skeptical of offline ads and tune them out. And about half think the actors that brands choose to represent women over 50 in ads look too young to be relatable. Which probably doesn't matter because, as the firms point out, traditional communications are simply drowned out by digital noise from blogs, ads, reviews, experts of various kinds. Half of the women polled said they pay attention to bloggers, not ads in magazines. Only 11% say they trust newspapers’ and magazines’ own content, and only 15% say they are more likely to purchase when they see a product showcased on TV.

Almost all of the respondents said they seek online reviews and first-person recommendations. The most influential sites for reviews seem to be Target and Amazon with more than 85% of surveyed women saying they trust reviews on those sites. Over half trust reviews on blogs and personal, and 53% trust third-party sites.