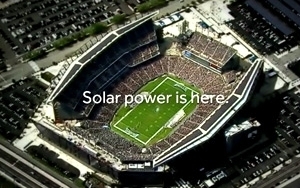 NRG Energy, the nation’s largest power company, has named Innocean as its full-service advertising agency, working on creative for the global NRG brand, as well as additional projects for its subsidiary Reliant.

First up, the two companies are developing a multi-faceted initiative to raise awareness among consumers of NRG and its vision of a clean energy future, particularly solar power.

"Before people raise their hands to get solar power, you have to make sure there is a conversation and that people know it is a viable option," says Chris Halas, Group Creative Director, Innocean USA. "We first want viewers to understand solar energy."

In order to help make a complicated and wide-ranging topic such as solar energy relevant to consumers, Innocean and NRG Energy are talking football. The energy company has installed solar panels at Philadelphia Eagles' Lincoln Financial Field, and the first phase of the campaign uses this installation to jumpstart a conversation about its potential.

Actor Matthew McConaughey serves as the ad’s narrator. In the voiceover he says that the old game can't compete, especially when it comes to solar power. Adds Halas: "If you know solar can provide energy for one of the roughest games out there, you can be sure it will work for your home or business." One of the spots can be seen here.

Additional creative under "The Power to Be Free" campaign will run across radio, digital, social media, and out-of-home.

This destination is designed to encourage a more in-depth conversation around energy and climate change through native and original content articles. Already one of the more popular articles "Being Mad as Hell for the Clean Energy Revolution" was written by NRG CEO David Crane. Innocean says the intent behind this effort is simply to raise awareness of not only NRG's initiatives, but of all renewable energy projects worldwide.

“NRG is excited to help empower the vision of a clean energy future and encourage people to change the way they think about and use energy,” said Sicily Dickenson, CMO, NRG Energy. “We hope to inspire people to join in the energy conversation and be a part of making a difference for future generations. We believe technologies like solar are here now and are something that people can embrace today.”