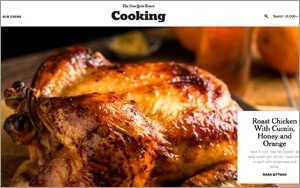 While its business model increasingly relies on getting subscribers to pony up for paid access to various mobile apps, The New York Times is not totally giving up on free distribution.

NYT Cooking includes over 16,000 recipes available for browsing and search, with features like a Recipe Box, which allows users to save recipes and then access them across different platforms; enhanced search, including options for searching by cuisine, diet, and meal type; Recommend Recipes, with suggestions based on a user’s past browsing history; and Recipe Collections, with hand-picked recipes organized around themes like “What Am I Going to Cook With This Stuff From the Farmers Market?”

The new app also has a “Learn to Cook” feature with video demonstrations of useful cooking techniques, a rating and sharing function with integration for email and Twitter, and a Today Widget compatible with iOS8, allowing users to access updated content and recommendations via their iOS8 notification center. Finally users can also sign up for the NYT Cooking Newsletter, an email update delivered three times week, highlighting seasonal dishes.

The launch of NYT Cooking is sponsored by Chobani, which will introduce a new, native advertising unit, the “Recipe Card,” containing custom content from the brand.

Among other things, the new NYT Cooking app will help raise awareness of the upcoming rebranding of the NYT’s Dining section front to Food, scheduled to take place this fall.

As noted, the NYT has also been introducing plenty of targeted paid apps as part of its strategy to boost digital circulation revenues. In June, it unveiled NYT Opinion, offering a stand-alone subscription to all NYT’s opinion coverage, as well as a continuous feed of NYT commentary and aggregation of opinion and commentary from other reputable sources. The subscription costs $6 for every four weeks, considerably less than other subscription options.

In April, the company launched another low-price digital sub option, NYT Now, a new app that costs $8 for four weeks of access and gives subscribers access to the most important NYT content, including videos, infographics and slide shows, as well as content from around the Web.