Too Big To Fail: Why The NFL On TV Is Still On Top 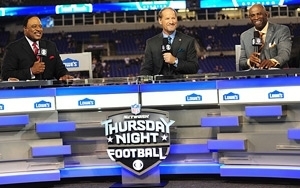 It would qualify as a pretty big TV story if TV’s highest-rated show was threatened with extinction because of the off-screen misbehavior of one or more of its stars.

And yet the stars of TV’s top attraction are getting in trouble all over the place, and almost no one seems to see these stories as a threat to this particular show’s popularity.

Why? Because it’s the NFL, that’s why. So far this season, the NFL is a bigger draw than ever on TV, thanks chiefly to its two prime-time showcases -- the Sunday night game on NBC and the new Thursday night game on CBS (tonight: Tampa Bay visits Atlanta).

Last weekend -- a long weekend for football fans that now stretches from Thursday night through Monday night -- the two prime-time games each drew more than 20 million total viewers.  And they emerged earlier this week -- on Tuesday -- as the highest-rated prime-time TV shows last week (Sept. 8-14).

For NBC, thanks to football, a top-ranking each week has become a rite of autumn. Last Sunday night’s game on NBC (the Bears vs. the 49ers), for example, drew 22.16 million viewers -- an improvement of nearly 2 million viewers over the same Sunday a year ago. Last Thursday’s game on CBS (the Steelers vs. the Ravens, and simulcast on the NFL Network) had 20.77 million viewers -- a 234 percent improvement over the same Thursday last year, when the CBS lineup was made up chiefly of tepid late-summer reruns.

Elsewhere last weekend in Football Land, the NFL held its own on Sunday afternoon on CBS (seven regional and national telecasts) and Fox (six games), compared to the same weekend a year ago. The same was true for the game seen Monday night on ESPN.

What’s the point?  Only this: That the NFL’s popularity on TV does not seem to have been dented one iota so far this season by the accumulating stories of off-the-field violence committed by some of its players,

While the media -- newspapers, Web sites, bloggers, commentators, editorial writers, and even Rosie O’Donnell on “The View” – have been vociferous in their attacks on the sport of football generally and the management of the NFL in particular (especially Commissioner Roger Goodell), rank-and-file fans are doing what they’ve always done -- painting their faces, donning their team jerseys and crowding into dens and family rooms to watch their weekly football games.

The undiminished popularity of the NFL -- despite the travails of Ray Rice, Adrian Peterson, and most recently, Jonathan Dwyer of the Cardinals -- is a good example of the “opinion gap” that sometimes opens up between the commentator classes and, well, everyone else.

Where the commentators see dark clouds on the horizon for the NFL, unless something can be done to stem this seeming groundswell of domestic violence, the great cheering masses apparently feel no misgivings about continuing to exercise long-held viewing habits they are apparently in no frame of mind to kick.

In a column this week headlined “The demise of the NFL isn’t as far-fetched as you might think,” one New York Post football writer even wondered aloud if the NFL might someday join the ranks of other businesses once considered too popular to ever go out of business but that did anyway, citing brands as notorious (and, in some cases, ancient) as Crazy Eddie, TWA, Korvettes, Philco and even Knickerbocker beer.

Of course, these companies all died out for a variety of unique business reasons not necessarily comparable to the issues facing the National Football League.

The fact is, it will likely take circumstances quite different from these stories of off-the-field violence to derail the NFL. While Rosie O’Donnell and others complain about the intensity of professional football and the violence that it spawns, it is precisely that violence and intensity on the field -- blocking, tackling and sacking quarterbacks -- that keeps millions glued to their sets. If that were to diminish, that’s when football would begin to lose its attractiveness as a televised spectator sport.

Yes, it’s true that the NFL should do all it can to hold its players to high standards of off-the-field comportment. At the same time, it’s worth mentioning that stories of off-the-field violence, where NFL players are concerned, are nothing new -- from Michael Vick to Plaxico Burress.

That doesn’t mean the NFL doesn’t have a problem. But it does indicate that if past history is any guide, you won’t start seeing steep ratings declines for the NFL on TV anytime soon.