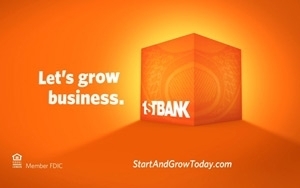 king a campaign this week targeting medium and large businesses, a first for the Lakewood, Colo.-based bank.

The campaign, created by TDA_Boulder, begins with a 30-second TV spot. Print, radio and out-of-home executions will follow in the coming weeks.

Businesses targeted are those specifically looking for a locally connected banking partner. Previous FirstBank business advertising had been directed to startups and smaller companies.

While FirstBank hasn’t targeted this size of business before, the customer base has included them, says Brian Jensen, FirstBank senior vice president of marketing.

“FirstBank has always served all business sizes, whether you are a new, small business or a larger, established company,” Jensen tells Marketing Daily. “Last year we focused our advertising on smaller business customers. We believe this year’s advertising campaign will resonate with businesses that are a little larger that are creating new jobs in the economy. It’s a great message that I think everyone can be excited about.

The commercial draws a line between fame (nowadays) and legacy. Its first half, culled from the Internet, is comprised of “fails.” A distinctly ungraceful woman “works it” in her cat suit; a balance beam gymnast lands on his crotch; a would-be swimmer cannonballs, not into, but onto an iced-solid pool; and more.

“Since when did ‘leaving a legacy’ mean ‘going viral’? Or getting on the ‘popular’ page? When did 15 minutes of fame become 15 seconds?” asks the commercial.

Business executives, the campaign’s intended audience, are, one presumes, less fascinated by “fails” than by “succeeds.” “Let’s grow business,” the voiceover continues in the spot’s second half. “Let’s create jobs. Let’s leave a legacy that matters.” And the imagery shifts to scenes of industry and commerce: construction, a retail storefront; a vast container shipping hub; a designer at her sketch desk.

The spot will run during prime, live sports and news programming on all broadcast networks, and on 20 top cable channels, from ESPN to History Channel to USANetwork. Online, targeted preroll video will appear via Specific Media network, Irvine, Calif., and for mobile, rich media banners will appear via Verve and Kinetic Social networks, New York.