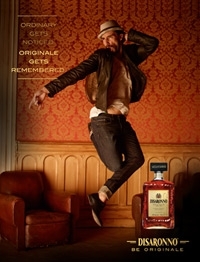 The 500-year old liquor brand Disaronno is in desperate need of reinvention. At one point, the almond flavored liquor was a popular brand known as Amaretto Disaronno, but with little marketing support over the years, the brand has become forgotten and overlooked by today's younger drinkers.

Now, the liquor brand's parent company Illva Saronno is refreshing brand with "The Disaronno - Be Originale," a new global campaign under its new advertising and branding agency the Burns Group. Assembly is the media agency.

This marks the first major ad campaign for the brand using an outside agency, following previous work that was developed in-house.

“The Disaronno target has probably only seen the brand in the back of a cabinet,” explained Michael Burns, Managing Partner of the Burns Group. “In reframing the brand, our solution was to create a mood that evoked a different time and era with stylish young characters who delivered on the brand’s new challenge to its consumer to ‘be originale.’ The result is a film that celebrates originality in all its forms.”

The campaign centers around a new signature cocktail “Disaronno Sour” that highlights the liquor as a mixed drink best shaken. This cocktail is featured in print and out-of-home ads that show a bartender mixing the drink. The ad was shot in Madrid to give it a European feel. Importantly, since this liquor is available globally, it was critical that the creative translate across regions. Partying and fun times are relatable everywhere.

To capture this spirit of fun, the campaign is also debuting :20 and :15-second spots airing in the U.S. and key global markets. The spots - filmed by UK-director Laurence Dunmore on location in a palace in Madrid - conveys a lively party through upbeat music as images shuttle the viewer from room to room. Each room shows a different but vibrant tableau of fun – including dancing, shaking, flirting and drink mixing. The film opens and closes with a still of the iconic Disaronno bottle.

These ads will air on ESPN2, NBC, VH1, SPIKE, BET, and WGN, among others, to coincide with key seasonality of party-hopping during the summer and autumn.

Meanwhile, this signature cocktail is also embarking on a tour. Select European hotspots in cities London, Rome, and Paris will host "terrace events" where this new cocktail will be served and enjoyed by tastemakers.

Ultimately, all components of the campaign are designed to position Disaronno as a cool brand by illustrating the night life experiences of featured characters across multiple channels.

“We are investing in repositioning the Disaronno brand to appeal to a more youthful and energetic consumer while maintaining the brand’s unique Italian essence,” said Paolo Dalla Mora, Global Communications Director from Disaronno. “We selected the Burns Group as our agency because of their proven ability to grow established brands through creativity built on insight.”

The company is spending an estimated $4 million this year on advertising.