Royal Philips Says It Is Time To Change The Light Bulb 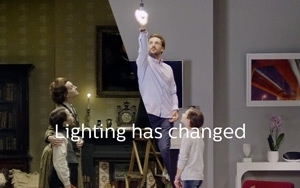 Lighting company Royal Philips is introducing Hue, a new connected lighting system that company executives believe "marks a turning point in the history of the light bulb." This fully connected lighting network allows every single point of light to be precisely controlled in real-time. Color gradients and animated interplays of color can even be created from within the 1,056 illuminated segments that make up the façade.

And creative agency Iris has developed a new ad campaign to help market Hue. The campaign's concept charts the evolution of the light bulb from the perspective of a family sitting room. It begins in 1879 – the year the first commercial incandescent light was unveiled – with a family excitedly fitting their first light bulb. Then, furniture, fashions and household gadgets change over the decades, yet the light switch and bulb remain the same. Finally, the room moves to the present day and the father replaces the bulb with a Hue light bulb, showcasing a range of lighting experiences using connected lighting. The ad can be seen here.

“We’ve created a film that you want to watch over and over again, and then pass on," says Chris Baylis, Executive Creative Director, Iris. "It’s an idea that starts conversations, gets people remembering what they grew up with, and gets them thinking about how quickly technology has changed and enhanced their lives. Now it is lighting’s turn to change and transform their lives and homes.”

The ad - helmed by Cannes Lions award-winning director Martin Stirling - will run online in :30, :60, and :90 second formats and target onsumers in the U.S., UK, Belgium, Netherlands, and Luxembourg.  UK's Oxford Circus station will air the film via outdoor screens as well as via the full escalator run of digital panels from September 22 to October 5.

Using real-time bidding, the ad will also be highly targeted to select audiences in these regions via connected smart TVs beginning September 29.

Indeed, there is a reason why this campaign is utilizing cutting-edge platforms and technology over more traditional channels. By its very nature, Hue is a product which appeals to digitally-savvy consumers who are exposed to advertising online and on smart TV, says a company spokesperson.