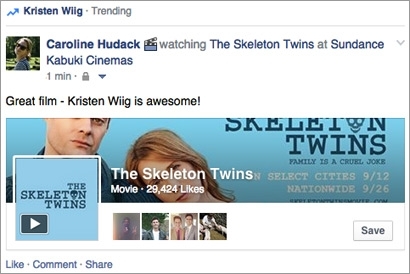 More changes are coming to Facebook’s News Feed algorithm. When deciding which posts to show to which users, the social giant will now give greater consideration to timeliness and activity-based relevancy.

In a co-authored blog post, Erich Owens, a software engineer at Facebook, and David Vickrey, an engineering manager, said the changes were based on user feedback.

Regarding relevancy and timeliness, they explain: “There are some instances where a post from a friend or a Page you are connected to is only interesting at a specific moment, for example when you are both watching the same sports game.”

Facebook’s broader mission with News Feed “is to show everyone the right content at the right time,” Owens and Vickrey said.

Per the changes, users are now more likely to see “trending” stories in their News Feed -- but only after a “friend” expresses interest in such a story.

On average, early testing of a small percentage of posts showed that this change led to a more than 6% increase in post engagement, according to Owens and Vickrey.

“If people are engaging with the post right after it is posted, and not as much a few hours later, this suggests that the post was most interesting at the time it was posted, but potentially less interesting at a later date,” they explain. “Based on this signal, it is more likely to appear higher in News Feed earlier on and lower at a later date.”

Facebook is also going to start taking this signal into account when considering which stories it chooses to “bump” in users’ News Feeds. By “bumping,” the company is referring to the act of resurfacing stories that users missed, but which it suspects deserve their attention.

At least in the near term, the changes are unlikely to have a significant impact on content distribution for posters large or small, according to Facebook.

Yet the changes come at a time when brands, publishers and popular individuals are questioning Facebook’s merit as an audience management platform.

Regarding Facebook’s decision to cut organic reach rates, some brands have even expressed a sense of betrayal, including Reid Benson, head of paid social marketing at Netflix, North America.

“Our organic team worked really hard to build that [Facebook] community, and then suddenly you can’t reach them,” Benson told attendees of MediaPost’s Social Media Insider Summit, in August. “It’s obviously upsetting to a lot of brands who … went out and earned likes.”

The social giant has insisted that declining organic reach rates are in everyone’s best interest and are an inevitable consequence of its growing community.

Regardless of Facebook’s justifications, research suggests that social networks are declining as engagement platforms, while brands and publishers are seeing audience engagement rates rise on their dedicated digital properties.