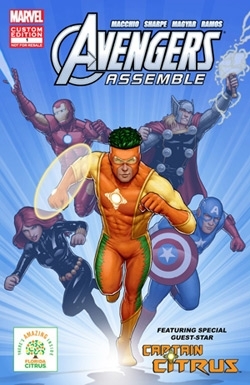 Move aside, Iron Man, Thor and Captain America. A new superhero has arrived. The Florida Department of Citrus (FDOC) is introducing Captain Citrus as part of a new campaign to boost Florida orange juice consumption among young kids and their families.

Developed with Marvel Custom Solutions, this superhero appears alongside Marvel's Avengers Assemble characters in a series of custom comic books that track the superhero's battle against villains while helping to convey the values of the Florida citrus industry. Marvel Entertainment's Creative Director and Editor Bill Rosemann oversaw the development of Captain Citrus.

The FDOC's partnership with Marvel includes a print comic book distributed free to one million children in schools across the country this fall, as well as an educational teacher's guide, providing a lesson plan aligned with best practices teaching guidelines.

Two additional digital chapters of the Captain Citrus story will be released at CaptainCitrus.com.

"Marvel was the obvious partner, because they do heroes better than anyone in the world,” said Doug Ackerman, executive director of the FDOC. “They know how to develop and leverage a character’s brand, across the same, broad demographics that constitute Florida Orange Juice’s target audiences,” Ackerman added. “And through their Marvel Custom unit they have a well-established network of partners throughout the nation, allowing us to deliver the message of OJ nutrition and the values of Florida Citrus directly to teachers, kids and their families."

This new program is being implemented as Commission -- which oversees marketing, research and regulation of the Florida citrus industry -- rethinks its strategy. FDOC activities are funded by a tax paid by growers on each box of citrus that moves through commercial channels. However, after crop challenges in recent years, the board's budget has declined, forcing it to “do more and do it better," with fewer dollars, says Ackerman.

Captain Citrus was originally introduced in 2011 as a costumed character to tour second grade classrooms across the state of Florida. Now, this character has expanded to become a digital asset that can be used worldwide.

The FDOC spent $28.16 million on marketing and advertising for the fiscal year ending June 30, 2014, down from $34.3 million year-over-year. Marketing and research expenditures accounted for 89.7% of total expenditures.