'47 Brand Stands By NFL, Launches New 'Let Your You Out' Campaign 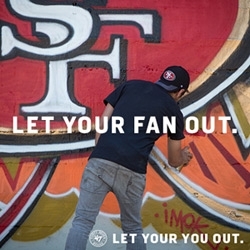 Although many are questioning whether advertisers should continue to be affiliated with the NFL, the simple truth is that many campaigns have been purchased and planned well before any hint of controversy. And it is very difficult to alter those decisions.

This is the circumstance for sports lifestyle brand '47 Brand. The apparel company is intertwined with the league as it sells fashionable merchandise adorned with NFL-licensed logos and designs. Hence, even in the best of times, it would be exceedingly challenging to distance itself. That said, the brand is standing behind the league. Executives say there are no changes or modifications to its NFL relationship.

This month, '47 Brand launches the "Let Your You Out" campaign with the brand's creative agency of record, The Fantastical to support its line of NFL merchandise. League officials approved the concept before '47 Brand went to production and then they approved all final elements.

The concept behind this multimillion-dollar campaign encourages consumers to be their true selves, promoting individuality through football fashion. The images showcase upscale and form-fitting NFL apparel and accessories worn by striking models, a notable shift from traditional league merchandise of oversized jerseys and one-size-fits-all caps.

Meanwhile, media channels were chosen based on success in previous campaigns and a greater understanding of the type of media its target consumers enjoy. To that end, magazines including Cosmopolitan, Glamour, GQ and Marie Claire are running special advertising sections showcasing NFL fashions that meld style with sports.

Since "our consumers live on social more than anywhere else and we want to engage them where they are most often," says a spokesperson, the campaign is heavily active in social media. A :60 clip as well as shorter versions run across the brand’s own digital properties. Additional content and messages will be featured on all of its social pages, including Facebook, Twitter, and Instagram.

The brand is also introducing a custom image generator that will allow consumers to upload pictures, and create customized “Let Your You Out” images with product incentive giveaways throughout the campaign. This newly built Web tool will be hosted on ‘47 Brand’s Tumblr blog.

‘47 Brands has worked with The Fantastical since February of this year. The sports lifestyle brand also has licensed partnerships with Major League Baseball, the National Hockey League, the National Basketball Association, and over 650 collegiate programs.

ad campaign, advertising, agency, football
1 comment about "'47 Brand Stands By NFL, Launches New 'Let Your You Out' Campaign ".
Check to receive email when comments are posted.
Next story loading