Can We Still Tawk? Joan Rivers Endorses iPhone 6...From Beyond 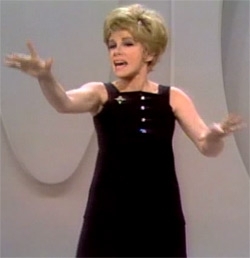 You know she would want us to joke about this, of course. She would be first in line with more rapid-fire zingers in five seconds than I could produce in a week.

Another of many post-advertising native, real-time, product placement, faux pas, social media automation went haywire last week. Among the many many social postings regarding the launch day of the iPhone 6 there was this Instagram post from comedic legend and E! Networks’ Captain of Fashion Police Joan Rivers (first picked up by TMZ).

“This badass is being replaced by an iPhone 6 (Not the fat one). I got this one in 2010, and after 4 years, my only complaint is that apps are now designed for bigger screens, and the battery gets tired. Never had a case for it, since it was most beautiful on its own. Great achievement in design. Great product. #apple, #iPhone #tech”

Well, you have to admit, the original intent was spot on. The endorsement aims for that emerging octogenarian smartphone market, one of the last demographic holdouts. The messaging reminds us that she is the fashion judge de tutti fashion judges. And on top of it she admits to having held on to her current iPhone for a while. She is no upgrade junkie.

Well, except for that posthumous endorsement wrinkle.

And it gives me an opportunity to add a bit of personal cultural memory regarding Rivers. When I was a kid in buttoned-down suburbia, circa 1965, Joan Rivers, Totie Fields, Phyllis Diller, and Moms Mabley were revelations. They were not only among the funniest comics at the time, they were doing important cultural work whether they or this 8-year-old kid knew it. In their own way, each jettisoned traditional femininity and replaced it with something better -- insight, intellect, wit.

It is interesting and indicative of the times that we accepted these comediennes in part because they did forsake their own femininity. It was a kind of deal. They usually made jokes about their own lack of sex appeal. This was the weird table stake for women to be allowed into the fraternity. We gave this same special pass to Rose Marie, Elaine May, Martha Raye, Imogene Coca, and to some extent Lucy. We would let these women into the club, if they left the feminine stereotype at the door. But that may have been what gave each of them such power. For this kid in Northern Jersey, they were teaching me that the opposite sex had much broader range than other parts of my socialization were signaling. In another five or six years I was having crushes on high school girls like these -- the ones with better comeback lines than bustlines.

And somewhere up there this trailblazer is looking down on this weird posthumous iPhone endorsement and laughing her ass off.