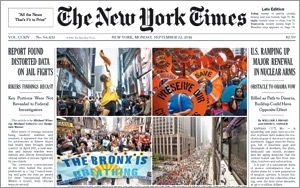 The First Draft site, available at NYTimes.com/FirstDraft, provides a round-the-clock news feed of political and policy developments, with a conversational tone and heavy emphasis on visual content. Coverage includes original reporting, breaking news, and highlights from other NYT coverage, along with analysis and aggregation of news from other sources, including social media.

The First Draft daily newsletter, delivered every morning, sets the agenda for the day and also features interviews with key players; the inaugural issue includes an exclusive video interview with Vice President Joe Biden about Washington’s dysfunctional politics. The newsletter is available for free to all subscribers.

The NYT has been cranking out a variety of new digital products to entice new subscribers, boost engagement with its existing audience, and increase its offerings for advertisers. Last week, the newspaper unveiled a free Cooking app, offering recipes, tips, and how-to guides drawn from the venerable publication’s voluminous epicurean archives.

In June, it unveiled NYT Opinion, offering a stand-alone subscription to all NYT’s opinion coverage, for $6 per month. And in April, the company launched another low-priced digital sub option, NYT Now, a new app that costs $8 for four weeks of access and gives subscribers access to the most important NYT content, including videos, infographics and slide shows, as well as content from around the Web.

At the same time, it also launched a premium subscription offering, Times Premier, which costs $45 per month and offers the most engaged NYT readers expanded content offerings, including the “Times Insider,” which provides a behind-the-scenes look at how the newsroom creates content.