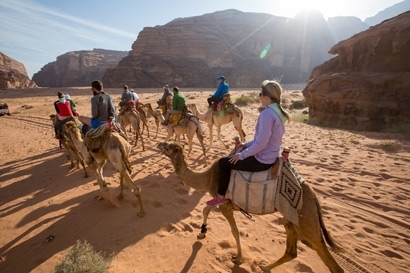 While much of the marketing world is stampeding toward shorter-and-shorter videos, Columbia Sportswear is going the other way, and just released “I am #OMNITEN,” a nearly one-hour long documentary that it hopes will win new action-adventure fans for its outdoor clothing.

The company took 10 members of its core band of brand ambassadors, known as the #Omni10, for an adventure extravaganza across the Kingdom of Jordan, complete with camel rides, four-wheeling tours retracing the travels of “Lawrence of Arabia,” snorkeling in the Red Sea and scrambling up the ancient staircases of rose-red Petra.

"We know there is an entire audience out there who is completely tuning out traditional advertising," says Scott Trepanier, Columbia’s senior manager of PR and promotions, “but we know they will watch and respond to our content, as long as it’s truly entertaining and doesn’t contain an overt product message.” And while the company has done plenty of shorter films, “we wanted to do this larger project as an experiment, and see if we can push this out through social media channels and continue to build buzz for our brand.”

The concept started back in 2012, he says, when the Portland, Ore.-based company recruited 10 outdoor enthusiasts and bloggers to join the #Omni10. “We took them hiking for a few days in the Grand Canyon, and there was nothing transactional about it,” he tells Marketing Daily. “We wanted to talk to their communities, and we wanted feedback on our products.”

It continued to add groups of 10 every six months, and for this project, invited all 40 of these brand evangelists to a surprise 10-event smackdown in Utah, with races that included dogsleds, snowmobiles, avalanches and archery. “It was sort of like an 'Amazing Race’ challenge,” he says, “and the 10 winners were then invited on the trip to Jordan.” A film crew from CMD -- its Portland ad agency -- tagged along, documenting the personal experiences of each of the 10 members.

The hope is that these bloggers’ social networks will drive traffic to the film, which the company debuted on Google+ hangouts. (The Queen of Jordan is already talking the movie up with her 3.2 million Facebook followers.)

What sets these travelers apart from Columbia’s competitors, he says, is that while they may be extraordinarily athletic, they’re just everyday adventurers. “They all have full-time jobs, apart from their blogs and outdoor passions. They’re ordinary people with a passion for the outdoors and discovery, and the film follows them on this epic journey to explore a world completely different from their own.”

Because it was entirely unscripted, he says, “it was nerve-wracking. We didn’t know what the outcome would be. But when we got home, we realized it was a really compelling story.”

He described the effort as an experiment. (Because Jordan, which borders Iraq and Syria, is struggling to attract tourism, it helped with much of the costs, he says, and Columbia was able to make the film for less than six figures.) “We’ll share it on our blog and across other social channels, and see what happens.” Like many companies producing content, “we never know what will be of interest.” For example, he says, one of its most-shared bits of content is a piece about poison-ivy myths. “So if this film is performing really well, we’ll take the approach we take with all of our content, and give it a little promotional boost to increase distribution.”