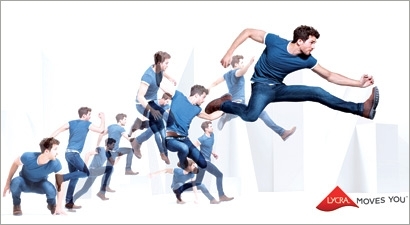 Lycra wants us to feel like dancing: It’s breaking a new campaign, including print and TV spots, which it hopes will build consumer demand for the stretchy fiber.

Themed “Lycra Moves You,” the new campaign uses a dramatic time-lapse ‘trail’ effect as a woman dances through her day in various bits of Lycra-infused clothing. The $40 million effort has just begun in Brazil, and will be breaking soon in the U.S., Europe and Asia.

“More than a year ago, we began lots of consumer insight research to try and understand the brand’s possibilities,” says Denise Sakuma, Lycra’s brand global director, based in Barcelona, “and realized that while consumers related to Lycra as a magical kind of technology, they didn’t understand that it was a fiber. When they did, it was a revelation for them, sort of 'Why don’t we put Lycra everywhere?’”

As a result, she tells Marketing Daily, Invista -- which owns Lycra, as well as such fibers as Coolmax, Antron and Stainmaster -- began the campaign’s trade component, connecting with fabric mills, clothing brands, and retailers. This consumer-facing phase is the next step for Invista, which is owned by Koch Industries. “First, we needed to reach out to more manufacturers to have them include Lycra in their products, or if they already were, ask us for authentication and Lycra hangtags. And as we’ve been doing that, it’s time now to reach out to consumers, so they can look for garments made with Lycra.”

SapientNitro created the campaign, which includes 60-, 30- and 15-second TV spots, directed by award-winning Philippe André, and set to Nouvelle Vague’s “Dance With Me.” (The track was re-recorded to change lyrics to “Move With Me.”) Print executions were photographed by Rankin.

SapientNitro also created a trade-targeted Web site and point-of-sale materials, which will be followed next year by consumer digital, social and in-store activity efforts.

While Cotton Inc. runs aggressive advertising promoting itself as a natural fiber, including a special push on all-cotton denim, Sakuma says fibers such as cotton and wool are not really Lycra’s competition. “We work very closely with blends, so that is not the issue. Our primary competition is the generic elastane fiber,” she says.

“We hope this resonates with consumers in an emotional context,” she says. “Using this time-lapsed imagery, we want to show that while Lycra may be invisible to the eye, it’s visible to you when you move.”