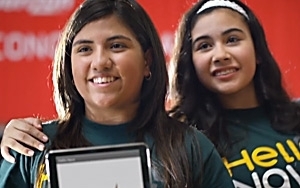 Verizon is looking to do more than pay lip service to Hispanic Heritage month with a new content marketing effort that spotlights the ways Hispanic groups and individuals are shaping the future through technology.

The “Heritage of Tomorrow” effort (which covers both Verizon’s television and wireless businesses), from Lopez Negrete Communications, showcases ideas from Hispanics that have improved the lives of others. One video (that will also run as an ad) tells the story of a group of Hispanic students who created an app to help one of their blind friends navigate the hallways of their school.

“We want to portray stories that are relevant to our market, not just for today, but are also important for the future,” Vicent Llopis, executive creative director at Lopez Negrete, tells Marketing Daily.

The agency tapped into The Verizon Foundation to help find the inspiring stories, Llopis says. “Sometimes, we only show the benefits and features of technology,” he says. “There’s a story behind that technology. When we were digging into this more and more, that’s where we found the potential in this.”

The videos, which come in long and short forms, use a blend of styles ranging from documentary narratives to one-on-one interviews, to tell the stories. The content will be housed on a dual-language Web site and will be pushed through a variety of social channels including Verizon Wireless’ Twitter account and the Somos Verizon FiOS Facebook and Twitter accounts.

"Latino achievement and traditions continue to play a major role in shaping U.S. culture. For months, and in some cases years, Verizon has provided the technology, resources and support to make possible Hispanic contributions in the U.S. This campaign does an excellent job of telling some of those human stories," said Oscar Madrid, director of multicultural marketing at Verizon, in a statement.

The initiative will also include television ads, print advertising, point-of-sale materials and direct mail. Although the campaign was launched in honor of Hispanic Heritage month, it is expected to have a life longer than that.

“This is something that’s going to live until the end of the year, and hopefully even until the the next Hispanic Heritage month,” Llopis says. “We’re not selling the ads, we’re selling entertainment and engagement.”