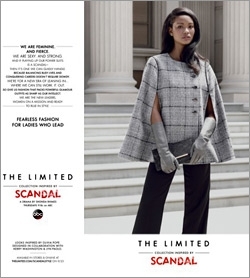 The supporting ad campaign is developed by strategic agency Yard, working directly with The Limited who partnered with ABC on the effort.

The advertising is aligned with series character Olivia Pope, though not focusing on the story lines of Scandal or her character per se. Hence, ads featuring Chanel model Iman convey what this collection represents in culture: a woman who can combine smarts with style.

"Success with sex appeal. She's the perfect example of a new generation of power women. That's why we featured a collective of fabulous women in the campaign around the idea of "Fearless fashion for Ladies who Lead,'" says Ruth Bernstein, Co-Founder and Chief Strategic Officer, Yard.

Still, it was a key challenge to develop creative that conveyed sophistication yet still resonated with fans of the series. Plus, the ads weren't able to feature the show's star Kerry Washington, though she was involved in developing the clothing line.

Executives involved in this collaboration say it is likely to expand to additional clothing and accessories.
ad campaign, agency, retail
Next story loading