Thursday Night On ABC: How To Get Away With Garbage 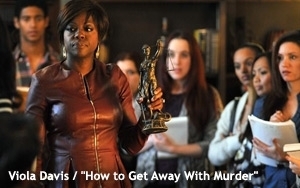 The verdict on “How to Get Away with Murder” is: guilty -- by reason of absurdity.

“How to Get Away with Murder” is the new drama series ABC is introducing tonight (Sept. 25) at the tail end of its all-Shonda Rhimes Thursday-night lineup of one-hour dramas. She is the executive producer of “Grey’s Anatomy” and “Scandal,” which precede this new “Murder” series, at 8 p.m. and 9 p.m. Eastern time, respectively (and which also return for their new seasons Thursday night).

This new Rhimes creation takes place in a fictional law school at a fictional college -- Middleton University -- located in a real city, Philadelphia. As anyone knows by now who has seen the ABC promo spot in which Viola Davis stands before the words “How to Get Away With Murder” written on a chalkboard, the show’s title is also the name of this law school class taught by the no-nonsense character Davis plays on the show.

She’s a part-time law school instructor and full-time defense attorney -- hard-nosed, resourceful, and brilliant (of course). One of the smartest things she does is this: She enlists her students to assist in the development of her defense strategy -- essentially getting invaluable no-cost help from a group of eager beavers who will stop at nothing to win their professor’s attention and earn her praise, and who don’t realize they’re being used like unpaid interns.

In the series premiere (which I’ve seen), we meet the first-year law students who will form the nucleus of the show -- an African-American woman, a Latina, a gay (Caucasian) man, an African-American man who was admitted into this law school at the last minute, and a white man -- a hotshot who claims he clerked for the Chief Justice of the United States over the summer.

The students alternately bond together while also trying to one-up each other in their battle to score points with the Davis character, Annalise Keating.

The formula for this show is this: Move through the exposition portions at a fast gallop in order to get them out of the way quickly (which often means directing your actors to recite their lines at double-speed), incorporate flashbacks and flash-forwards as tools for storytelling, generously ladle on the secrets that every character must harbor and, of course, devise these secrets to be so surprising that viewers at home will gasp.

In the series premiere, we learn a couple of these big, gasp-worthy secrets, and expect to learn more in subsequent episodes, for the simple reason that there are too many characters in this ensemble for us to learn all of their secrets in one 42-minute episode.

So what’s so absurd about “How to Get Away With Murder”? Well, to fully explain the “verdict” decreed at the top of this blog (above), I would have to reveal key plot developments that would spoil the show for those interested in sampling it.

Let’s just say that once you start piling on the secrets and shifting back and forth in time, you begin to get the feeling that plausibility will not turn out to be this show’s strong suit.

To ABC’s credit, the network has not been promoting this show along logical lines. Instead, the network’s strategy seems to be to promote this show along “guilty pleasure” lines. The “guilty pleasure” strategy means tacitly admitting that the show and its various storylines are over-the-top and possibly even unbelievable, while also insisting that it is those very elements that make the show entertaining and possibly even a pleasure.

Whether the show is a pleasure to watch -- guilty or otherwise -- is a matter of personal taste. I found it not pleasurable, by virtue of the very characteristics the show puts forward as potentially pleasurable and capable of making its audience feel “guilty” for enjoying them.

With every last character seemingly involved in secret activities that range from duplicitous to downright deadly, there is not a single likable character in the whole show, which means there’s no one to root for. In addition, there’s nothing believable about any of the characters or the situations they’re in, starting with this first-year law school class, which revives every cliché you’ve ever come across in past TV shows (plus numerous movies and novels) about law school.

“How to Get Away With Murder” is an un-pleasurable, one-hour exercise in cynicism that assumes that its audience agrees that when it comes to people, everyone is guilty of something.

I understand cynicism, and I have been guilty of practicing it on occasion, but I don’t derive a guilty pleasure from watching cynical TV shows. In the final analysis, I guess I’m not much of a believer in the guilty-pleasure principal. To me, the words “guilty pleasure” are synonymous with “waste of time.”

tv
3 comments about "Thursday Night On ABC: How To Get Away With Garbage".
Check to receive email when comments are posted.
Read more comments >
Next story loading