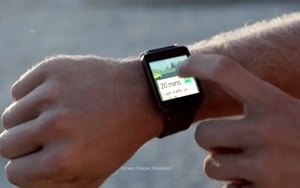 Wearable devices may take time to catch on as makers work out the glitches, but that hasn't stopped Google from pushing the apps it thinks buyers will use to make their life easier. The company has published a set of design guidelines it wants developers to follow. Making the apps feel personal takes a creative vision.

The app from Allthecooks allows users to search and browse different recipes on their Android phone or tablet before sending to the watch.

The recipe synchronizes to the watch through the data API. It launches automatically, fulfilling one of several key creative visions for Android Wear. Many of the searches don't require a swipe, but rather an "okay Google" voice command.

The published design principles require apps to launch automatically, inform at a glance, suggest content based on preferences, and require zero or low interaction from the user. The inputs are based on touch swipes or voice.

If the wearable app causes the user to stop whatever they are doing, it’s a good time to consider how to improve it using Google's published principles.

Information should appear in chunks; notifications kept to a minimum; and clear, bold type with color should convey consistent branding. Content will become more important. Among the other guidelines:  use copy sparingly and omit unecessary text.

While Google appears to have a clear focus on the content, wearable watches have yet to integrate several key technology features that would give brands an opportunity to connect with consumers without running traditional advertisements. Here's one example: Johnny is making chocolate chip cookies, but doesn't quite have enough vanilla in the pantry to finish the task.

Johnny would know this if the Allthecooks' app integrates a shopping list of available ingredients in his cupboard. Through GPS, the app would tell him the vanilla is available 1.3 miles at the Ralphs market, aisle 3, top shelf, for $1.03. Google Maps, if needed, serves up directions on how to get there. Not yet, but soon.