Just In Time For The Jewish High Holidays, Fox Celebrates 'The Simpsons' 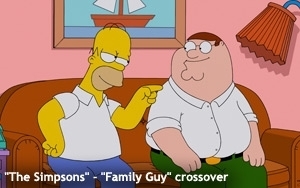 Give “The Simpsons” credit for audacity.

The long-running Fox series returns for its 26th season Sunday night with a Jewish-themed episode airing smack in the middle of the Jewish High Holidays. Well, you know what they say: In comedy, timing is everything.

It’s a very special night for “The Simpsons.” Not only is the show returning for season No. 26 (at 8 p.m. Eastern on Fox) -- itself an achievement that boggles the mind -- but the Simpson family will get an extra hour of exposure a half-hour later when the special one-hour season premiere of “Family Guy” at 9 has the Griffin family contriving a getaway to Springfield, where they end up as guests in the Simpson home.

It’s a “crossover” stunt that has been long awaited by devotees of Fox’s Sunday night “Animation Domination” lineup. The two productions have been rivalrous (or so it has seemed) and anyone who has wondered what it might be like to see the shows’ characters face off in a single episode will not likely be disappointed.

In the episode, which Fox provided in advance to TV scribes, various characters from each of the shows pair off for a series of interlocking storylines -- “Family Guy” patriarch Peter Griffin and Homer Simpson, wife Lois and Marge Simpson, Griffin daughter Meg with Lisa Simpson, and diabolical baby Stewie of “Family Guy” and Bart Simpson. Even the Griffins’ articulate talking dog, Brian, gets into the act when he is encouraged to befriend the Simpsons’ dumb-as-a-fencepost mutt named Santa’s Little Helper.

Look for all the instances in which the characters poke fun at each other’s shows (either directly or indirectly). Most of the jibes are made at the expense of “Family Guy,” which the producers of “The Simpsons” evidently believe is a blatant copy of their show.  The situation comes to a head with an epic battle between two characters.  Also look for a cameo appearance by Fred Flintstone.

For all the riches of this crossover episode, the “Simpsons” stand-alone episode at 8 p.m. is outstanding.

It’s a Jewish-themed episode because it revolves around Krusty the Clown, aka Herschel Krustofsky, who becomes upset by the insults leveled at him during a televised roast (featuring guest-roasters Jeff Ross and Sarah Silverman) and then questions the meaning of his entire life.

He seeks counsel from his father, who happens to be a rabbi (voiced, as always, by Jackie Mason), and the show is then off-and-running.  From scenes inside Springfield’s only synagogue – Beth Springfield – to the “Simpsons” concept of “Jewish Heaven” (which includes a Pickle Forest and a scene in which Groucho Marx dances with Karl Marx), it is an uproarious and outrageous celebration of Judiasm.

And yes, it’s true: As Fox has been hinting, a “Simpsons” character will die in the episode.

Besides Jeff Ross and Sarah Silverman, listen for the voices of Kelsey Grammer (as Sideshow Bob) and David Hyde Pierce, playing himself in a scene with one of Krusty’s sidekicks, Mr. Teeny (the chimp).  And make sure and tune in for the beginning of the show.  You won’t want to miss one of the strangest “couch-gag” openings the show has ever produced (directed by animator Don Hertzfeldt).

It’s become a cliché to praise “The Simpsons” year after year, but when a show maintains this level of quality, energy and inventiveness after 25 seasons, it really comes to defy any temptation a critic might harbor to point out its flaws.  Sure, I could probably contrive some flaws here and there.  After all, a critic wouldn’t really be a critic if he didn’t find fault somewhere, no matter how critic-proof a show might seem.

But when a TV show has been around this long, and given us so much, what’s the point of criticizing it?

tv
1 comment about "Just In Time For The Jewish High Holidays, Fox Celebrates 'The Simpsons'".
Check to receive email when comments are posted.
Next story loading