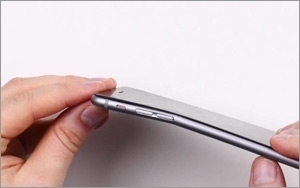 I know the universe has suddenly gone askew when my wife is giving me advice about my gadgets.

“Don’t update your iPhone” is the message she sends by email -- from downstairs. Apparently, Apple’s iOS 8.01 release that created havoc on Wednesday had made it into daytime programming. She watches in the background as she works, so I get the usual parade of declarations off of daytime fare throughout the day -- emails that tell me “we have to take more Vitamin D -- especially you because you never see the light of day.” Or the latest -- “sitting is the new smoking. If so then why aren’t you dead yet?”

But this week the emails were focused strangely on Apple. The weird week Apple suffered had penetrated daytime TV.

There was the reality behind those long Apple iPhone 6 lines: Chinese line-sitters selling their two phones to black marketeers around the corner.

There was the rarity of the iPhone 6 Plus on launch day -- revealing that yields for these new screens were way beneath expectation and need.

There were loads of complaints of a very buggy iOS 8, which prompted a quick 8.01 update that reportedly bricked some phones and made matters worse for even more customers.

There were complaints that iPhone 6 users couldn’t connect to their car audio systems anymore via Bluetooth, or they were getting strange behavior once they did connect.

And then, of course, there was “Bendgate.”

“The iPhone you are waiting for is going to bend in your pocket,” my wife emails.

While Apple now claims that fewer than ten customers have complained to them about bent phones, the Web went apoplectic this week over a YouTube video showing someone bending their iPhone 6 Plus. This phenomenon isn’t entirely new, as some previous phones have been shown to do the same thing. But physics being what it is, immutable, larger planes are more susceptible to this kind of tension. Nevertheless, the incident led to Apple actually opening its test facilities to journalists in order to demonstrate its concern for quality assurance.

This has all gotten so weird that even Consumer Reports is jumping in for its bit of PR exposure. The famously independent testing lab said yesterday it will use its special machinery as an objective mechanical test that would gauge the malleability of smartphones.

Meanwhile, on the sidelines of this little circus, Samsung and others are falling all over themselves like overheated teenage rivals to poke at the mighty Apple. In response to the Bendgate affair, HTC tweeted about the HTC One: “Designed to withstand the most demanding environments. Like your pockets.” Samsung, as is its wont, was more blunt and less artful in reminding everyone of its Galaxy Note Edge with the wraparound screen. It tweeted: “Curved. Not Bent.”

I have to say I have never understood the sense of this kind of brand teasing. It always seems to diminish the rival brand more than the target because it underscores its defensiveness.

But my wife is wondering why Apple still seems to get a pass on all of this. “If this were Microsoft, there would be outrage,” she insists. True enough, insofar as incidents like this would be read as corporate incompetence in Microsoft’s case. For Apple, no specific meaning is attached to the problems, perhaps aside from post-Jobs decline. The real damage comes when a narrative emerges to pull the threads together into a single, insistent negative tale about the brand. The idea that Apple has somehow lost its Mojo is always there, but it doesn’t seem as compelling as the idea that the company has overreached or has become the kind of corporation it said it wasn’t.

For the time being, at least, I think Apple gets a pass mainly because most consumers root for the brand, and that can’t be said of many companies. It once represented a kind of magic elixir that is an endemically American blend: innovation, technical prowess and deft salesmanship.