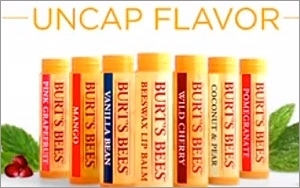 The debut 30-second TV spot, tagged “Uncap Flavor,” features whimsical animation of a series of events related to the flavors of the lip balm. Bees drop a Beeswax Lip Balm, a mint parachute opens, a grapefruit butterfly eludes a net of honey, cherries fall on a coconut umbrella which sails to an isle with mango and pomegranate balloons, the pomegranate pops its seeds which light a fuse, and all flavors burst in fireworks.

The soundtrack is an acoustic guitar and whistling. At spot’s close, a voiceover says “Discover all the naturally moisturizing flavors of Burt’s Bees Lip Balm,” and a hero shot shows the lines’ Pink Grapefruit, Mango, Vanilla Bean, plain, Wild Cherry, Coconut &Pear, and Pomegranate varieties. Two 15-second versions of the spot are similar.

Targeted are lip balm users, ages 20–40. The main premise of the effort is the recognition that besides its traditional role as a solution for chapped lips, many new users now view the lip balm’s flavor varieties as fashion statements.

TV will run on all broadcast networks and cable including Bravo, E!, TBS, TNT, and USA and CW. Support advertising includes: five full pages in magazines including Allure, People, Elle, Glamour, others; flash banners on YouTube, Pandora, and other sites via Collective network; paid Twitter and Facebook posts; and two :06 Vines.

Founded in Maine in 1984, Burt’s Bees is now based in Durham, N.C., and owned by the Clorox Company.