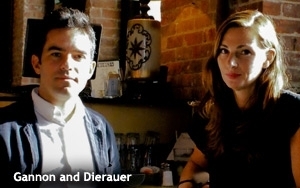 Right now, with content ubiquitous across TV, online, and smartphones, advertisers are finding that music helps to cut through the clutter because it genuinely resonates with consumers.

Now, two ad industry executives -- Peter Gannon and Jessica Dierauer, are launching Able Baker -- a new music content company based in New York City to serve as a connector between advertisers and musicians.

“Being in the agency world for many years, we’ve seen the potential in the market for a new kind of music company, one that's a hub for both brands and musicians,” said Jessica Dierauer, who along with Gannon has taken the title executive producer of the new outfit. “Music was once an afterthought, but now consumers want a fuller experience and a deeper connection with music and artists. Our goal is to fill in the gap by creating and fostering those ideas and relationships.”

The company will partner with brands and musicians to create music for content and strategically align all parties involved in music production. The agency will also offer original composition, music supervision and licensing, music strategy/consultation and content production across TV, film, digital and non-traditional disciplines for both the advertising and entertainment industries.

"From brief to execution, we learned a tremendous amount of strategy, how it all comes together, and how to translate communication musically," says Peter Gannon. "In parallel, we spent 50% of our time working with the music industry, observing all the nuances, evolutions, and desires to pivot. From our positions, we have expertise and knowledge in two quickly changing industries who are working together in unprecedented ways, but often still speak separate dialects. Able Baker is the middle ground where translation occurs, rights are navigated, and no creative idea sacrificed."

Already the agency has scored original music for six IBM commercials that aired during the U.S. Tennis Open; has written original music with German composer Hauschka, and did music supervision for EA Sports, Google and The Gap.

The agency, whose name is taken from the first two letters of the original phonetic alphabet, is currently hiring and expects to double in size by November. "There is no shortage of great ideas, and recognition of benefits in artist and brand collaborations," says Gannon. "Whether it is pairing the right brand with the right artist or soundtrack, or navigating the rights issues surrounding decisions, or being able to translate in musical jargon what a client wants in the experience.”