From Silly To Profane: Publicity Materials Sent To TV Columnists Run The Gamut 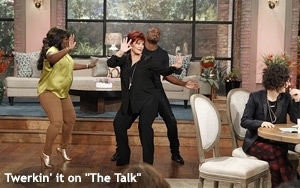 Maybe I’m old-fashioned, but the quality and permissiveness of some of the publicity materials I have received recently from various media companies are pushing the boundaries of good taste (to put it tastefully).

And in other cases, some of the “news” releases I have been receiving make me wonder if TV can get any sillier. Here’s a case in point: Recently, I received a news release from the nice people at “The Talk” on CBS that carried the headline (caps theirs): IT’S A TWERK-OFF ON ‘THE TALK’ WITH WAYNE BRADY! (exclamation point theirs too).

Look, I get it. It’s entirely possible this twerk-off with the exuberant Brady and the wacky “Talk” co-hosts made for really fun television.  I don’t know. I didn’t see it. But I also wonder: What am I really supposed to do with this? Write a story about Wayne Brady twerking? Is that what they expect me to do? I don’t mean to pick on “The Talk.” I understand that this twerk-off probably stood out as the “highlight” event of that day’s show and therefore, would get press-release treatment before the day was out.

The fact is, it might not qualify as “news,” but there’s really nothing wrong with it. (Attention, “Talk” people: Keep ’em coming.)  The same can be said for all the breathless news releases that come out of the E! Entertainment Television publicity shop. Most frequently, these seem to be about either Kendall Jenner or Kendra Wilkinson (you can take your pick) -- two personalities whose careers and lives are not exactly top-of-mind with me. Nevertheless, I encourage the folks at E! to continue keeping me in the loop on Kendall and Kendra.

More attention-getting than these pieces of fluff are the press materials that increasingly, are rated R. For example, back when Showtime was gearing up for the just-concluded second season of “Ray Donovan,” the channel’s lovely media kit was delivered to my home office.  It was a high-quality item -- a full-color booklet on luxury stock. A lot of the networks are producing these high-end press materials to grab the attention of TV beat reporters and columnists.

Opening this booklet, I discovered that one of the first inside pages was devoted to a single sentence, which apparently was being promoted as some sort of catchphrase, either uttered by Ray himself or by somebody else about Ray. The phrase was: “Who the f--- are you?” There were no dashes in Showtime’s version. Again, maybe I’m old-fashioned, but coming upon an f-word headline in press materials that I tend to leave out in the open around here makes me uncomfortable.

This past summer, I remember glancing at my e-mail one morning to find a news release with the headline: “Yeah, Bitch! Relive Breaking Bad From the Beginning With a Breaking Bad Binge Event.”  The release went on to announce the details of a complete re-airing of the entire “Breaking Bad” series that AMC was planning in July and August.

Fine. Who doesn’t love an opportunity to binge-watch “Breaking Bad”? And yes, I get this too -- “Yeah, bitch” is a catchphrase that came to be associated with Jesse Pinkman, the character played so memorably on the show by Aaron Paul.

And yet, despite the phrase’s linkage to the TV series, I have to be honest: When I first saw it in my inbox, I found it jarring -- as a journalist -- to be “addressed” by a publicist with the words “Yeah, Bitch!”

Here again, I don’t mean to persecute or otherwise single out the fine people at AMC. I am sure they were just having a bit of fun with that headline. And of course, if their intention was to get my attention, then I guess you could say the strategy worked.

But still: I feel it’s worth stating that along with the coarsening of TV (and the world in general), television publicity seems to be getting coarser too -- and it need not be.

And as far as TV catchphrases go, evidently we’ve come a long way from “Sit on it, Potsie!”

tv
1 comment about "From Silly To Profane: Publicity Materials Sent To TV Columnists Run The Gamut".
Check to receive email when comments are posted.
Next story loading