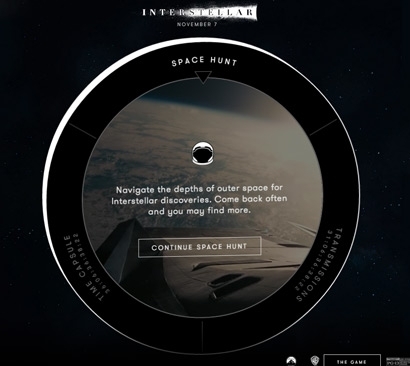 Google has integrated several of its platforms to help Paramount Pictures market the forthcoming movie "Interstellar," which opens in November.

The Interstellar space hub taps Google+, Google Play, YouTube and Google for Education giving site visitors the opportunity to explore the movie through a hub.

With humanity's time on Earth coming to an end, the Christopher Nolan-directed movie follows a team of explorers traveling beyond this galaxy to discover whether mankind has a future among the stars. The movie stars Matthew McConaughey, Anne Hathaway, Jessica Chastain, Bill Irwin, Ellen Burstyn, John Lithgow and Michael Caine.

On the Hub, visitors will find trailers by clicking around the galaxy. The clips are also found on YouTube. As users click on stars and other clues they unlock new movie-related content. Fans also will have the option of purchasing tickets online and taking part in Google+ Hangouts.

A Time Capsule Project was created, allowing fans to generate content that Nolan will curate to create a short film. The Google for Education comes to light when Google and Paramount deliver math and science movie-themed lesson plans to students at thousands of schools across the country.