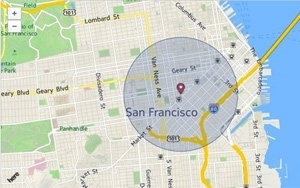 In the last couple of years, Facebook has ramped up efforts to generate more ad spending from the 30 million local businesses on its site. To that end, the social network has introduced a new ad option designed to help drive foot traffic to small businesses.

The new “Local Awareness” ad type announced Tuesday allows marketers to target people who are within a certain radius, like a mile, of a business’ address. “With local awareness ads, businesses can quickly and easily find new customers by showing ads to groups of people who are near that business’s neighborhood,” stated a Facebook for Business blog post.

To set up a campaign, a marketer using Facebook’s self-serve ad tool would select “Local Awareness” from the list of ad objectives (e.g., App Installs, Page Likes), and then select the business page on Facebook to promote. The next step is entering the business’ address (if it’s not already included on the page) and choosing a radius around which to advertise.

A map shows the area covered by an ad. “Our system uses all this information to create an audience for the ad that includes people who live nearby or were recently near your business,” notes the Facebook post. Marketers can also target by age and gender and set a budget and time period for an ad as well as calls-to-action like “Get Directions.”

“Our conversations with advertisers have shown that when it comes to driving in-store sales, an ad’s reach is far more important than the engagement it receives (things such as clicks, comments or likes). So we’ve designed local awareness ads to help businesses reach the most people possible in an area,” explained Facebook.

The company this summer launched a five-city tour led by Dan Levy, Facebook’s director of small business, to try to convince local business owners to earmark more ad dollars for the social network. As part of that effort, Levy emphasized Facebook’s ability to reach consumers on mobile devices, where Facebook users spend most of their time.

During Facebook’s most recent earnings conference call in July, COO Sheryl Sandberg also noted that of the more than 30 million active small business pages on Facebook, 19 million are also on mobile. “We think we have a big opportunity to help SMBs...grow their businesses,” she said.

In that endeavor, Facebook is competing with other locally focused online and mobile services including Yelp, Groupon, YP and Foursquare. Locally-targeted digital ad spend in the U.S. is projected to reach $31 billion this year, and increase 13% to $35 billion next year, according to local media research firm BIA/Kelsey.

With the focus on tight location-targeting in the new ads, Facebook stressed it’s allowing marketers to target certain areas, but not individual users. It also pointed out that people have the option of turning off location services on their phone if they don’t want to see ads tied to their location. But that also means they can’t use other location-related features, like checking into a venue or adding location to Facebook posts.