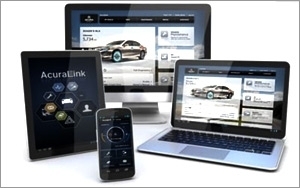 There is a really good reason that automakers need to take their mobile Web sites as seriously as they take their traditionally organized sites, not to mention their advertising -- and it's not merely because everyone has a smartphone. It's that if a shopper has a good user experience on a manufacturer's mobile Web site he or she is much more likely to go to social media to talk about the virtues and features of that brand's vehicles versus someone who has a “meh” experience. A new report from J.D. Power and Associates, released on Thursday, also says the same holds for a shopper's experience on a third-party automotive site.

The J.D. Power 2014 Automotive Mobile Site Study, going on its third year, also looks at what smartphone-optimized content and tools are most effective on OEM and third-party automotive Web sites. The study examines Web site usefulness on — in order of importance — information/content, navigation, appearance and speed. Satisfaction, per J.D. Power, is calculated on a 1,000-point scale. The firm says the study, run in July and August, includes 11,451 evaluations of automotive mobile Web sites from vehicle shoppers who intend to purchase or lease a vehicle within the next two years.

A third of respondents said they “definitely will” share vehicle information via social media after an exceptional experience (overall scores of 901-1,000), compared with only 3% of shoppers after a poor experience (scores of 500 and lower). Among shoppers using an OEM or third-party automotive Web site, 45% said they either “probably will” or “definitely will” share information via social media about a vehicle they researched.

Said Arianne Walker, senior director, automotive media and marketing at J.D. Power. “This provides auto brands a great opportunity to get their content out in front of consumers through social media. The challenge is not only having great content to encourage sharing, but also ensuring that consumers have an outstanding experience no matter what site they are accessing on their smartphone.”

Among site parameters that boosts the experience for users are appearance of the site, videos, interior 360° and exterior 360° tools, and build and pricing tools. The study finds that shoppers who share vehicle information on social media are more likely to share imagery than things like payment/lease or dealer information.

Among manufacturers, Acura's mobile, smartphone-optimized site ranks first, with a 811 score. Next come Cadillac, Porsche and Chrysler, all above 800. GMC, Fiat, Infiniti, Dodge, Ram and Huundai round out the top 10. The bottom 10 are Mini, Smart, Audi, Subaru, Scion, Volvo, Mazda, Buick, Lexus and Kia -- all below 771.