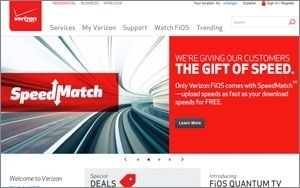 The Better Business Bureau's National Advertising Division has told Verizon to revise some of its ads touting the company's fiber-optic network, including ads on its Web site.

The ads -- which were challenged by Comcast -- implied that FiOS delivers a better connection for video-chatting and gaming, according to the National Advertising Division.

The National Advertising Division found fault with those ads, because they “use comparative language without stating the basis for the comparison.” The organization added that Verizon's language could “reasonably convey the message that FiOS is being compared to cable.

The self-regulatory organization also said Verizon should revise ads stating that the company was, “Rated #1 for speed, reliability and customer satisfaction.”

That Verizon boast came from a recent American Customer Satisfaction Index survey, which itself was based on consumers' reviews of their own service providers. The NAD said that ads that reference consumer satisfaction surveys should clarify that respondents rated their own service, because the surveys don't necessarily reflect “objective comparable performance measures.”

“NAD has determined repeatedly that a “rated #1” claim based on a consumer preference survey is misleading unless the basis for the claim is disclosed,” the organization said in its written opinion.

Verizon said it disagrees with the National Advertising Division's recommendations to revise the ads, but will take the recommendations into account in future campaigns, according to the opinion.

The self-regulatory group didn't side completely with Comcast. The group rejected Comcast's challenge to Verizon ads with the statement, “get the difference 100% fiber optics makes.” The National Advertising Division specifically found that Verizon had substantiated claims that “reasonably imply that fiber-optics are the reason for FiOS’ network performance.”

Verizon isn't the only company to see its ads called into question by Comcast. The cable provider also recently challenged broadband ads by CenturyLink. In that case, the National Advertising Division told CenturyLink to revise ads bragging that its service is significantly faster than Comcast's.

Some of those CenturyLink ads boast of broadband connections up to 13 times faster than Comcast's. But the National Advertising Division said those ads compare Century Link's fastest tier of service (40 Mbps) to Comcast's slowest “economy” tier (3 Mbps). The organization said in its opinion that consumers might not understand that the ads compared different types of service plans.