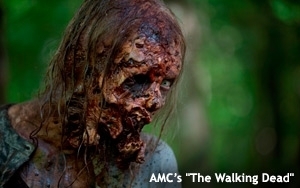 For proof that the old “rules” of TV don’t mean much anymore, consider this: The goriest, most violent show on TV is also one of the most popular.

It’s “The Walking Dead,” and it’s drawing the kinds of audiences that only a handful of shows can ever hope to attract these days.  For its fifth-season premiere this past Sunday night on AMC, 17.3 million tuned in -- a series high, and more than a million more than tuned in for the premiere of Season Four (16.1 million).

In addition, AMC said “The Walking Dead” drew 11 million viewers in the demo (18-49), a 6 percent increase over the Season Four premiere -- and a demo rating that is also nearly unheard of today. Even the “Walking Dead” after-show, the talk show known as “Talking Dead,” had total viewership of 6.9 million, including 4.5 million in the demo.

With 17.3 million viewers, “The Walking Dead” is approaching the neighborhood where TV’s highest-rated, mainstream shows reside -- shows such as “NCIS” and “The Big Bang Theory” on CBS.

But how can this be? One of the old rules of TV held that the more popular a show was, the blander or less offensive it would have to be. Or to put it another way, a show like “The Walking Dead” that consists almost entirely of scenes of unrelenting bloodshed should only be capable of attracting a niche audience -- in this case, people (adults hopefully) who have a particular passion for horror movies and TV shows and who also don’t get squeamish at the sight of such things.

Sure, there are plenty of these people -- but 17.3 million of them? It seems so -- but it’s still difficult to get one’s mind around the fact that a show this violent is scoring ratings in the manner of what used to be known as “mainstream” entertainment.

How gory was this past Sunday’s episode of “The Walking Dead”? One scene that was especially graphic -- even for a show as violent as this one -- was the scene in which a group of captives were waiting to be butchered. Some of them met this fate as a “butcher” went down the row smashing the captives’ skulls one at a time with an aluminum baseball bat while another butcher slashed their throats -- out of which gushed great fountains of blood into a steel collection trough.

Of course, the great majority of violent acts in “The Walking Dead” are committed against zombies, who are dead people who have come back to life in various stages of decomposition. As everyone knows who has ever seen a zombie movie, you kill a zombie by destroying its brain (or what’s left of it) -- which means that “The Walking Dead” is chock full of scenes in which zombies’ heads are blown apart with bullets, penetrated by long knives (generally driven into ears or eye sockets), impaled on various pointy objects such as fence posts, and decapitated with machetes or axes.

One of the ways of explaining why millions of viewers aren’t put off by this type of constant violence in “The Walking Dead” is because so much of it is directed against creatures that are dead already and possess no human capacity for pain or emotions of any kind. And we all understand that the mass killings of zombies are taking place because these killings serve the show’s storyline, which is that the zombies have to be killed or else they will eat alive any human they can manage to catch. That means that nearly every scene in “The Walking Dead” amounts to a life-or-death situation for the show’s human survivors. The intensity of these scenes is what makes “The Walking Dead” so attractive. It is suspenseful, addictive entertainment.

But the people who were lined up to be butchered in Sunday’s episode were not zombies. They were humans who were slaughtered like zombies -- which would tend to set their deaths apart from this show’s usual slaughter of the mindless undead.

One explanation for the popularity of “The Walking Dead” is that people aren’t all that bothered by a TV show that forces them to witness acts of extreme violence because audiences have been exposed to so much violence already -- in movies, in scores of other TV shows, online and on the evening news.

Violence in general has gone mainstream -- so why not “The Walking Dead”?