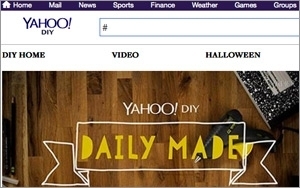 Yahoo on Wednesday extended its rollout of digital magazines with the launch of Yahoo DIY, a new site that aims to attract do-it-yourself enthusiasts with articles, videos and slideshows on design trends, décor improvements, crafts and projects for kids.

Overseeing Yahoo DIY is Katie Brown, host of the Katie Brown Workshop on public television, whom Yahoo announced hiring in August. On Yahoo DIY, she hosts “Katie Made,” one of three video series offering tips and guidance on various projects along with “Home Made” and “Daily Made.”

The new site has the same image-centric look and feel as the other digital magazines the Web giant has introduced this year, including Yahoo Food, Yahoo Tech and Yahoo Beauty. While DIY boasts no launch sponsor, it also offers the same premium native ad placements, which are marked as “sponsored” but mirror the surrounding content.

During an Advertising Week keynote, Yahoo CEO Marissa Mayer touted the company’s glossy digital magazines and push into native advertising, which also includes in-stream ads in its section home pages and on Tumblr. But so far, the new formats haven’t helped restore growth to Yahoo’s sagging display ad business, which declined 7% in the second quarter.

The launch of Yahoo DIY comes a day after Yahoo announced hiring Kevin Gentzel, formerly Chief Revenue Officer for The Washington Post, as its new head of ad sales for North America. At WaPo, he oversaw the rollout of its BrandConnect and Brand Studio services for creating sponsored content and custom ad programs.

Gentzel’s role in developing native advertising and content marketing at the newspaper, which had its best year in digital advertising in 2013, likely played a part in his Yahoo hire. The company will reveal its latest ad results next Tuesday, when it reports third-quarter earnings.

Macquarie Securities analyst Ben Schachter in a new report today estimates that Yahoo’s display ad revenue will fall 8% in the quarter compared to a year ago.