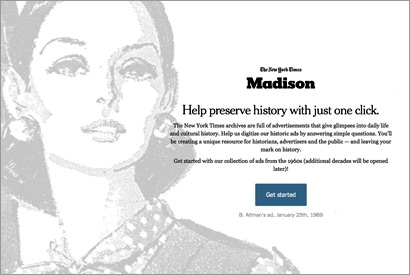 Step into a time machine as The New York Times revisits these ads through its newly released digital archive platform for vintage ads called Madison, a reference to Madison Avenue, still often used as a shorthand way of referring to the advertising business.

The archive resurrects every print ad from every edition of The Times in the 1960s, with additional decades will be opened up later.

This initiative was inspired by the newspaper's TimesMachine, a similar platform where subscribers can read complete issues of The New York Times in their original context, says Alexis Lloyd, Creative Director of The New York Times Research and Development Lab. "When TimesMachine was being developed, I was browsing through old issues of The New York Times and I would find myself completely entranced by the ads. They are such a textured and visceral reflection of history, revealing social mores, technological changes, and more. I knew that Times readers would find them equally compelling and wanted to find a way to make our historic ads more searchable and discoverable."

The platform shows all the portions of New York Times pages that editors think might be ads -- that is, everything that isn't either an article or an image or photograph that ran with an article. "In most cases those are ads, but they can sometimes be other visuals or content that isn't tagged as an article (like the masthead or hockey scores)," says Lloyd.

"When Madison visitors 'find ads,' they help us to affirmatively identify which of those assets are in fact ads, so that they can then be tagged and transcribed."

Indeed, what’s really unique about this collection is its reader engagement feature. The paper is inviting readers to peruse the archive, identify ads and even transcribe them. To encourage participation, Madison allows users to track the progress they’ve made and “level-up” – achieve titles after completing certain tasks. The ads are also all fully shareable via social media.

In addition to engaging its readers with a rich and under-viewed part of its archive, editors also created a flexible, modular platform for developing crowdsourcing projects. This platform, called Hive, will be released in the next few weeks and will allow others - both inside and outside of The Times - to create new experiences around their own unique collections.