Apple on Thursday unveiled a new version of its flagship iPad model that is faster, thinner and features the Touch ID fingerprint sensor and an improved camera. But anyone hoping for a larger screen size will have to wait until at least next year.

At a press event today at its Cupertino, Calif. headquarters, Apple introduced the iPad Air 2 and an upgraded iPad mini 3, as well as announcing  the public launch date -- this Monday -- for its recently announced Apple Pay service. The company also took the wraps off the latest releases of its Mac OS X mobile iOS operating systems and new iMacs.

Initial speculation leading up to the event suggested that Apple might try to shake up the sluggish tablet market by launching a 13-inch iPad, an enlargement of the current 9.7-inch display.

But in a rare oversight, Apple yesterday inadvertently revealed in an official guide to its iOS 8 software that the new iPads would feature the same screen sizes and design as their predecessors. The iPad mini remains at 7.9 inches. A recent  Bloomberg report indicated that Apple has pushed back the release of a larger, 12.9-inch iPad until next year.

Along with adding Touch ID, the iPad Air 2 is now 18% thinner than the prior model, and comes with a faster processor, an improved retina display, upgraded 8-megapixel camera, LTE wireless connectivity and a new gold color option in addition to silver and “space grey.” 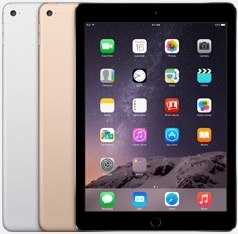 The iPad mini 3 also gets Touch ID, an improved (5-megapixel) camera and comes in gold. In a novel step, Apple is also allowing iPad 2 users to switch carriers more easily through a neutral SIM card built into the cellular version of the device. Pricing for the iPad 2 former starts at $499 and the mini, at $399.

The worldwide tablet market, which Apple effectively created with launch of the original iPad in 2010, is in a funk. Shipments are expected to increase only 6.5% this year after growing 50% in 2013, according to research firm IDC. That’s partly because tablet replacement cycles have been longer than expected and because of the growing popularity of phablets.

Apple itself finally joined the trend toward larger smartphones last month with the release of the 5.5-inch iPhone 6 Plus, along with the 4.7-inch iPhone 6. The launch of its own phablet could contribute further to the erosion of the iPad’s once dominant position in the tablet market. That share shrank in the second quarter to 27% from 33% a year ago, according to IDC.

But at the Apple event today, CEO Tim Cook expressed confidence the latest iPad would win over consumers, saying the company had improved on what is already “the best tablet in the world.”

Perhaps the key update to the new iPad -- especially for marketers -- is inclusion of the Touch ID button, which Apple launched with the iPhone 5S and allows users to unlock their devices and make purchases via iTunes stores. The feature will also now enable purchases through new Apple Pay service, for making mobile payments at retail and online checkout.

Apple announced last month that the service would roll out with an initial group of bank partners, including Chase and Bank of America, and retailers such as Macy’s, Staples, Target and Walgreens. Since then, Apple Pay has added support from another 500 banks as well as additional businesses like Airbnb and StubHub.

“Touch ID is meaningful because the tablet is the best converting mobile shopping device,” said David Hewitt, vice president, mobile practice lead at SapientNitro. “Given that, you could say Touch ID is boosting impulse-buy capabilities since the iPad is already an optimized shopping device.”

Spending on tablets will exceed that on smartphones by more than a 2:1 ratio this year, and by 2018, tablets will account for 73% of m-commerce sales, according to eMarketer. In comments released following the Apple announcement, IPG’s Media Lab suggested that Apple Pay via the iPad will be limited for now to online shopping, since no mention was made of the near-field communication (NFC) technology required for in-store purchases.

“What Apple presented today was a lot of upgrades and some new features and opportunities for developers, including better graphic performance, which will be attractive to game developers and to attracting gaming users to the new iPads,” observed Julian Zehetmayr, chief executive of mobile ad platform MobFox.

Apple said it will begin taking orders for the new iPads on Friday and begin shipping by the end of next week.