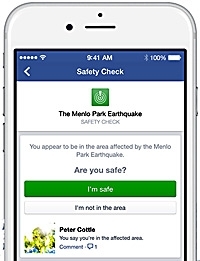 Positioning itself as a necessary utility on par with water or gas, Facebook is rolling out Safety Check -- a service for people to let loved ones know they are safe during major disasters.

“Safety Check is our way of helping our community during natural disasters and gives you an easy and simple way to say you’re safe and check on all your friends and family in one place,” Mark Zuckerberg, Facebook CEO, explained in a Thursday blog post.

Facebook engineers were inspired to develop the service following the 2011 earthquake and tsunami in Japan.

When Safety Check is activated after a disaster, people in affected areas will now receive a Facebook notification asking if they are safe.

Facebook will determine a user’s location by looking at the city they have listed in their profile, their last location -- if they previously opted in to Nearby Friends -- and the city where they are using the Web.

If people are safe, they can select “I’m Safe,” and a notification and News Feed story will be generated with an update. Friends can also mark other friends as safe.

“If you have friends in the area of a natural disaster and the tool has been activated, you will receive a notification about those friends that have marked themselves as safe,” Naomi Gleit, vice president, product management, Sharon Zeng, product manager, and Peter Cottle, software engineer, explain in a co-authored blog post on Thursday.

“Clicking on this notification will take you to the Safety Check bookmark that will show you a list of their updates,” they note.

Along with its obvious crisis-management benefits, Safety Check should also serve to strengthen ties between Facebook and its 1.3 billion users, and justify close tracking of users’ whereabouts. Massive though it is, the social giant faces continuous threats from rival networks, while growing privacy concerns among users are fueling demand for anonymous platforms.

Facebook is itself developing an anonymous messaging app. Facebook’s ad partners, however, put a premium on their ability to connect users’ identities to their digital activity, so a turn toward anonymous networking could threaten the company’s bottom line.