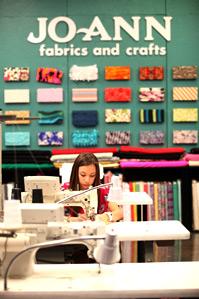 Jo-Ann Fabric and Crafts Stores is trying something new this season. The chain is introducing its first ever brand integration of any kind via a younger-skewing extension of the popular reality show Project Runway. Also it’s adjusting its strategy and for the first time is targeting teens and tweens — a distinctive shift from its traditional focus on its primary consumer base of mothers and grandmothers.

In this effort to connect with a younger teen demographic, Jo-Ann is partnering with Lifetime and The Weinstein Company on the newest extension to Lifetime’s Project Runway series, Threads, which premieres on October 23. Publicis Groupe’s Spark Communications, part of Starcom MediaVest Group, has created several promotional programs for the integration.

"Jo-Ann has a strong history with the older female demographic, but was interested in the potential in reaching new consumers, particularly moms, teens and tweens," says Deb Medsker, SVP Global Director, Spark. "They also wanted to promote the craft side of the business. In general, when consumers think of crafts, they think of Michaels or Hobby Lobby."

Under the deal, Jo-Ann is the exclusive provider of fabric for the young designers and will award the winner of each episode $10,000 to be used at any Jo-Ann Fabrics & Crafts store or Joann.com. "This is very integrated, but organic. Every project requires Jo-Ann products. You can't do the show without [them]," says Medsker.

Like the original franchise Project Runway: Threads is a design competition but this eight-episode series only features school-age designers. Each show will bring in three new contestants with one weekly winning designer who will also receive a scholarship to LA’s Fashion Institute of Design and Merchandising and a “top-of-the-line” sewing and embroidery studio.

After this brand integration deal among Jo-Ann, Lifetime and Weinstein Company was finalized, Jo-Ann then approached Publicis' Spark to drive attention to this partnership. As part of this promotional outreach, Spark developed an online sweepstakes with Lifetime and a multi-faceted deal with Seventeen magazine, respectively. "We were brought later to the game than we usually are, but we are pleasantly surprised by the number of arms and legs we were able to build into the partnership to amplify the integration itself," says Medsker.

The sweepstakes will urge viewers to submit their own designs for a chance to win a $250 Jo-Ann gift card and have a chance to win a grand prize trip to New York. Seventeen Magazine is debuting a full-page advertorial to promote the show, and @seventeenmag will host a live twitter party during the premiere allowing exclusive access to experts from Jo-Ann and Seventeen Magazine. Seventeen editors also participate in the show and will use their respective social media channels to raise awareness among their fan base.

Additional promotional support includes in-store signage and appearances by the show's judges and contestants. Jo-Ann will monitor sales of items with a more youthful appeal to see if the campaign is helping to attract younger shoppers.
agency, branded content, media, promotion
Next story loading