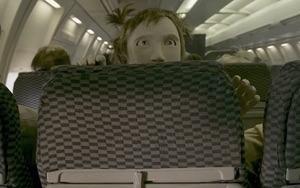 Crying children; tiny peanut packages; chatty obnoxious seatmates; video entertainment screens too far away to see anything. Flying can be an ordeal. Now, Virgin America and Eleven San Francisco are launching the "Blah" campaign to illustrate just how soulless the flight experience is when offered by the mainstays of the airline category. And, by contrast, to highlight the superior services offered by Virgin America.

The concept introduces Blah Airlines as a fully-responsive brand, with a website, Twitter account, Facebook page, and working phone number, among others. "We had a lot of fun with this as well," says Bryan Houlette, Creative Director on the Virgin America account at Eleven. "We really wanted to treat Blah Airlines as a real entity. One that has a website, a 1-800 number, and of course a fax number. And to respond in the way an outdated, boring airline would. Try them out. They're fun."

The campaign centers around a film that depicts the experience of a mundane flight from takeoff to landing through the eyes of mannequins. Again, the entire experience from wheels-up to wheels-down for 5 hours, 45 minutes. This realistic recreation of a flight between Newark and San Francisco features several amusing "easter egg" moments for those with enough endurance, including Lovers Nest (at 40:32), Annoying Kid (at 1:08:00) and Rock, Paper, Scissors (at 2:05:29).

"Originally the plan was to do three different films all based on real flights," says Houlette. "A short one, a medium-length one, and a long-haul flight. But in the end, that proved to be a bit too much and not necessary to make the point. So, we took the longest one across the U.S. to really show what some people put up with for a really long time. It was a fun challenge."

Although the film - which already has more than 167,000 views - is designed under the Blah brand, it does not hide that this is actually from Virgin America--the film is posted on its YouTube channel. And within the film itself, there's a moment where the hero looks out the window and sees a Virgin America plane flying by and the option to "Take a Radical Departure," which then drives tovirginamerica.com.

"Throughout the film, we show Blah lacking a lot of amenities, like plugs at every seat. And we allow the viewer to "Exit Blah," which also drives to virginamerica.com," says Houlette.

Meanwhile, through the Blah social media channels, the campaign responds to people just like real airlines do with Blah as the example. "And people seem to be eating it up and really enjoying it. We've had some fun ideas about how to continue the story if it feels like we still have an audience, but I don't want to give anything away just yet," says Houlette. The campaign will evolve based on consumer reaction.

Eleven has worked with Virgin America for eight years. In May, the agency introduced new out-of-home advertising to encourage travelers to upgrade their seats.