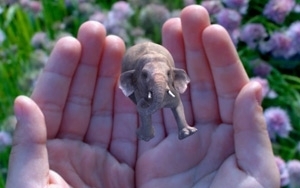 Magic Leap, a start-up focused on augmented reality technology, said it has raised a $542 million funding round led by Google.

When magic dragons fly comes to mind when thinking about the technology. Rony Abovitz, president, CEO and founder of Magic Leap, believes the company can build technology to transcend "the current perception of mobile computing, augmented reality, and virtual reality" to revolutionize the way people communicate, purchase, learn, share and play.

Not much is known about the company. On the company's Web site, which glosses over the details, Abovitz reminisces his childhood where "great movies could transport you to whole new worlds and universes. Books, comics, and art meant creative freedom. Computing meant total personal freedom with technology: I could create something new and share it with my friends."

A recent blog post provides a glimpse into the technology, which sounds similar to Facebook's acquisition of Oculus and the technology behind Google's disposable cardboard model distributed at the I/O conference in June. Among the fantasy and magic, "the real world that was the most magical and amazing," he wrote. "An encounter with a horse on a farm, being with an eagle and her nest at Cape Canaveral, and kayaking with a pod of dolphins in the Florida Keys. Fireflies at night bested any display."

Earlier this year, Magic Leap closed its Series A round of venture capital. Until this most recent infusion, the company had raised more than $50 million in its series seed and A rounds to develop its proprietary technology platform, from a press release from earlier this year.

Prior to starting Magic Leap, Abovitz also co-founded and led the development and technology for MAKO Surgical, a maker of human-interactive robotics for orthopedic surgery. The company was acquired by Stryker for $1.65 billion in December 2013.